Blackbury Wood is an ideal entry sized wood for the prospective woodland owner, whether the first venture into having a woodland of your own or perhaps as another addition in a sought after locality.

The woodland forms part of Harcombe Hill, located on the eastern slopes of the beautiful Sid Valley, within the East Devon Area of Outstanding Natural Beauty. The location is peaceful with surrounding land either wooded or farmland. Ideally located for cycling or walking along the East Devon Way and further to coastal towns and villages such as Sidmouth and Branscombe.

Blackbury Wood is a mature broadleaved woodland formed of numerous tree and shrub species along with plentiful ground flora. The top or eastern side of the woodland is a fascinating mix of towering tall oak, ash and birch trees with holly shrubs. Some of the denser growth provides privacy whilst the ground remains mostly clear. If desired some thinning of holly would allow sunlight through to encourage ground flora. There is a picnic bench sited here, an ideal place to sit and ponder, if you keep still you may be rewarded with seeing one of the many roe deer that are often found grazing on shrubs.

The lower, western side of the woodland, below an old track that runs through the heart of Blackbury Wood, has a more 'classic' woodland feel about it. Here there are still larger trees including oak, birch, beech and ash but also a lower layer of shrubs such as hazel. Under clearings beneath mature beech trees are flowers such as Dog's mercury, Wood spurge and Herb Robert. The woodland has an attractive spring which runs along the whole of the western boundary and there is a clearing here for picnics and camping.

Blackbury Wood has an interesting topography that include rocky ridges with large grassy plateau's under which are wooded valleys and rich grasslands. The ridges in this wood and around the local area are steeped in the history with ancient human settlements from the Neolithic age. One being nearby Blackbury Camp - from where the woodland takes its name.

Blackbury Camp is a fort which is thought to date from the 4th Century BC and was used by Iron Age people in the later periods. It had large ramparts with a single entrance which was protected by an unusual triangle shaped 'barbican'. It is located where 2 ancient tracks meet.

Blackbury Wood has an historic bank along the southern boundary, being not far from the Jurassic coast it is also a great place to look out for old fossils of shells in the stones both within the woodland and in the stream along the northern boundary.

There are a number of thriving, local small scale fishing industries based along the nearby coastline with day boats catching fish and crabs. The bass fishery attracts many anglers in season and there are a number of chartered fishing trips available.

Please do enjoy your visit to Blackbury Wood, but take care of any undulating ground or trip hazards as well as standing or leaning deadwood which has been left as a wildlife habitat.

Particulars and plans were prepared by our local manager, Stuart Brooking.

All boundaries are indicated with blue markings on posts and trees.

The southern boundary is indicated by an old wood bank.

The eastern boundary runs along a forestry track.

The northern boundary is indicated by a line of fence posts.

The western boundary is indicated by the stream.

Before visiting please register your interest with the local agent, who will provide you with the entry code for the gate.

- From Honiton take the A375 south towards Sidford & Sidmouth.

- At the top of the hill out of Honition turn left at Putts Corner onto Seaton Road, signposted to Seaton & Farway.

- Stay on this road for around 2 miles until you get to Chelson Corner Cross where you turn right onto Beech Tree Lane.

- Follow this road for about 1/2 a mile and take the first turning on your right at Chelson Cross, opposite 'Long Chimney Farm' which is signposted to Harcombe.

- Stay on this winding road for about 1.5 miles until you see a lay-by on your right at the top of a hill with 2 field gates. Carry on past these gates and down the hill until you see a forestry track in front of you on a left hand bend in the road. This is the access track and has a 'public bridleway' sign on a post here.

- Park on the left hand side of the track at the entrance and walk up to the main woodland entrance gate or continue up the track if you have a suitable vehicle.

- Open the gate using the code provided and drive into the main woodland area closing the gate behind you and scrambling the code on the padlock.

- To reach Blackbury Wood take the left hand track down the hill and continue for for a few hundred metres until see the name sign for 'Blackbury Wood' on your left and a parking area just after.

- Park here to walk down into the woodland. You can turn at the end of the track to follow the same track out when leaving.

- Satnav/GPS note: the postcode EX10 0PR is for the point shown by the red dot on the location maps number 2.

A delightful, manageable woodland with numerous features including a stream-lined boundary. 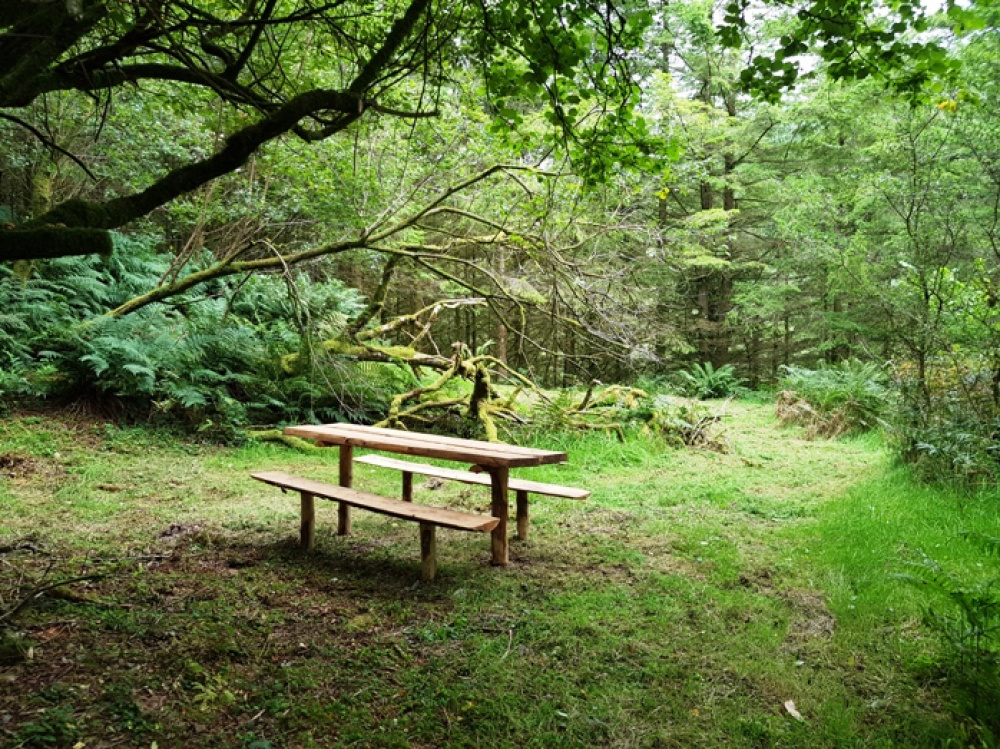 A predominantly conifer woodland with some areas of broadleaved trees within the stunning landscape of Exmoor National Park - included with this woodland is the use of an area of land next to an idyllic stream-side setting. 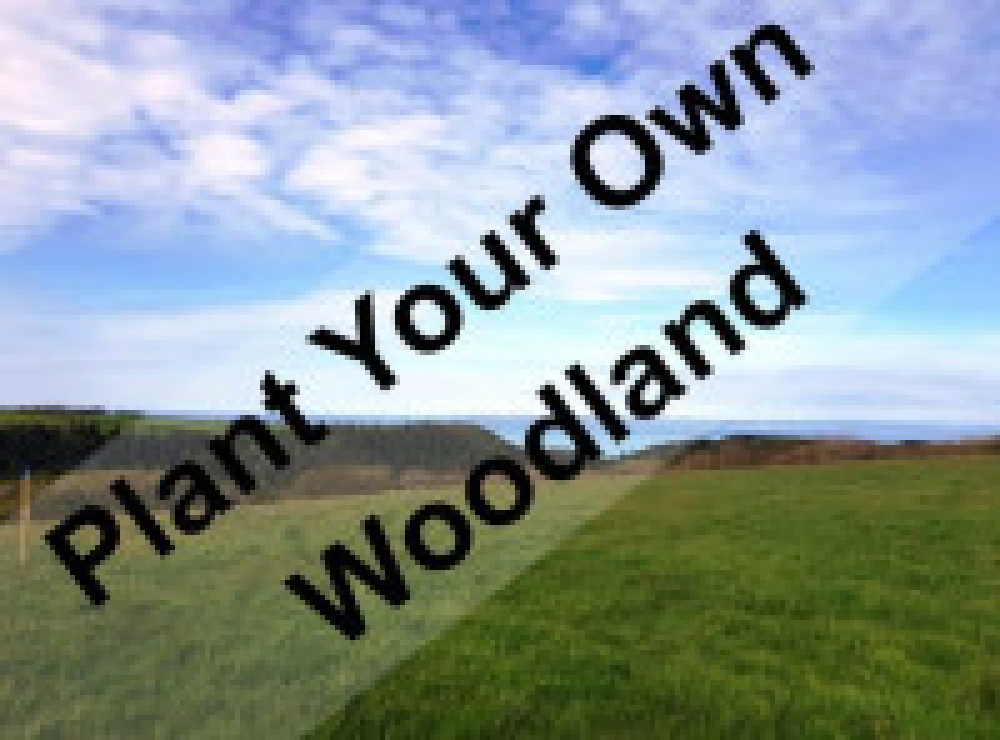 A lush grassland meadow and small copse set upon a headland near the north Devon coastline with potential for tree planting. 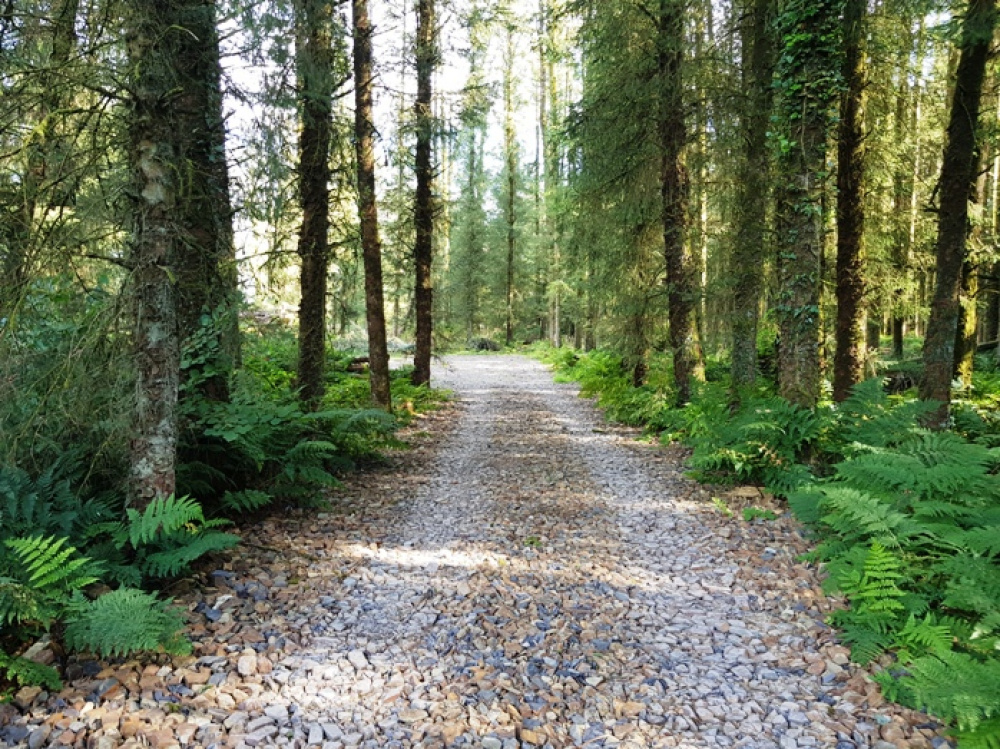 Located near to the stunning north Devon coastline, a predominantly conifer woodland with areas of natural regenerated broadleaved trees.