Rats (brown and black) have been ‘camp followers’ of humans ever since we adopted a ‘settled’ existence.  In modern cities, it is often said that one is never more than 20 yards from a rat.  Whether this is true or not, rats have been a pest throughout the millennia, most notably associated with the spread of disease such a bubonic plague but also Weils Disease (Leptospirosis).

However, more recently they have been associated with collapse of certain island communities / civilisations; and the systematic destruction of wildlife colonies.  One example of an ecological disaster is that of Easter Island.  At one stage, the island was covered with a dense forest of palms and 20 other tree / shrub species – but the palm was the dominant species with millions of them covering the island with greenery.  They and the other species formed the basis of an ecosystem that supported populations of land and sea birds.  The island and its inhabitants was separated from its nearest neighbours by 1400 miles of ocean.  The human colonisers of this island arrived with the sweet potato from South America, and a complex and stratified society formed that eventually fashioned the statues. 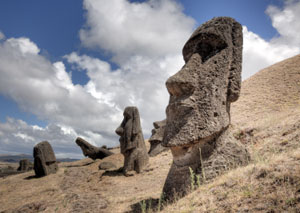 Now the island is mainly famous for its monolithic stone heads that look out over the ocean; it is also cited as an example of ‘human induced ecological catastrophe’ – the island lost its trees, this was followed by the collapse of society and culture.

Dr Terry Hunt (working at the University of Hawaii) has looked again at the decline.  Examination of all the palm seeds on the island showed clear evidence of having been gnawed by rats.  It is now suggested that rats arrived on the island, perhaps as stowaways in the canoes or rafts of the original colonists.  The rats found an ‘unlimited’ supply of high quality food (rich in protein) in the palm seeds.  Evidence from others island (for example, Hawaii) indicates that the density of rats in such a situation can reach 75 / acre.  This would suggest that the rat population of Easter Island could have reached 3 million plus.

The rats (with no predators) would have effectively destroyed the palms by eating their seeds so that they were not replaced as they aged and died, or were cut down.   So the loss of plants, ecosystems and people was probably not a ‘simple’ story of over-exploitation by indigenous peoples. 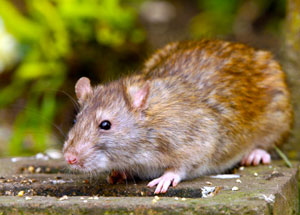 Rats have also become a problem on South Georgia (first surveyed in 1775 by James Cook).  Here it is thought that brown rats have been introduced over the years by whaling ships – probably during the nineteenth century.  Professor T Martin (Dundee University) found that there were rats everywhere.  The rats kill the chicks / nestlings of ground nesting birds, even ones larger than themselves - eating them alive.  Albatrosses, petrels, prions, pipits, pintails are all threatened.  Many species have been driven to ‘refuges’ on small, offshore islands.

Now a program of rat eradication is underway.  Pellets of rodenticide have been distributed in areas that are surrounded by glaciers.  The rats do not cross over the barriers that the ice presents so areas that have been treated are not easily recolonised.   The South Georgia Heritage trust estimates that it will take two seasons to remove the rats.   Professor Martin has been quoted as saying that when Cook first set foot on the island it was ‘perhaps the most important seabird breeding island in the world’

Other bird / wildlife populations are threatened by rats, for example,  on the Galapagos and

This is true, we have one visiting the garden daily to take the bird seed, love feeding the birds, any ideas, to stop without killing? Our dog has had to have the jab so as not to contract the disease, we do not have this disease in Australia.