The British Dragonfly Society has produced a report “State of Dragonflies, 2021”.  Dragonflies display the usual characteristics of insects, three pairs of jointed legs, three clear divisions to the body, compound eyes and a pair of antennae.  They also have two  pairs of (transparent) wings.  The hindwings are broader than the forewings so they belong to the group - Anisoptera (from the greek unequal wings).  They can fly fast and manoeuvre well.  Their ancestors were some of the first winged insects to evolve.

The report notes that

However, compared to many reports on the collapse of insect numbers, it would seem that that many dragonfly species are responding to climate warming and an increase in the number of ponds (for example, see the woodlands blog of the restoration of ghost ponds in Norfolk), lakes, gravel pits in recent years. The larval stages of dragonflies (nymphs) are spent in water.

Apart from changing the distribution of various animals (and plants), climate change can have other effects.  Some homeotherms ‘warm blooded’ animals (birds and mammals) are undergoing changes in their body form or ‘shape shifting’.  Sara Ryder et al of Deakin University, Australia has studied several species of Australian parrot and has found that their beak size has increased since the nineteenth century:  this increase in beak size is thought to be associated with better heat exchange.  Other research has reported on changes to tail length in wood mice, also tail and leg size in masked shrews.  The changes are generally less than 10% but they do seem to be responses to changing climatic conditions. 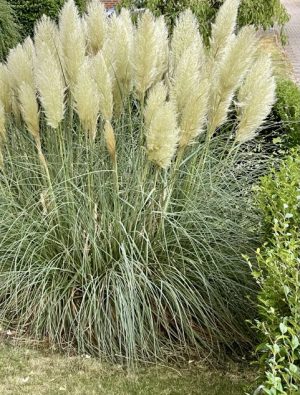 Pampas grass (Cortaderia selloana) is a tall, clump forming grass with attractive plumes that can find a home at the coast, in town or in your garden.  It was originally a species native to South America.

However, it now has a much wider distribution, mainly due to its use as an ornamental plant though it was also used in South Africa to control erosion on dumps around mines. Each plume can produce tens of thousands of seeds.  Consequently, it is now regarded as an invasive species in many countries. It has expanded across industrial and urban areas, squeezing out native species in coastal regions of France, Spain and Portugal, Now the IUCN (International Union for the Conservation of Nature) has introduced a system to recognise the threats posed by harmful species (such as Pampas Grass)  - The Environmental Impacts Classification of Alien Taxa.