Mushrooms may be thin on the forest floor at the moment, but if you raise your eyes you can find more permanent fixtures higher up on tree trunks and stumps in the form of a surprisingly diverse array of tough and hard-wearing bracket fungi. It is a class I have tended to avoid, largely because many of them look so similar, but also because they can be quite difficult to manipulate into aesthetically pleasing photographic compositions. However, this is only if you look at them from a certain angle.

Anyone who has ever expressed an interest in the mycological world may well be familiar with the frustrating habit some friends have of sending them “What is it?” messages alongside blurry smartphone snaps of the top of the nondescript muddy brown shelves of certain finds. The crucial thing one has to remember about bracket fungi is always to look underneath.

Take, for example, the two most familiar Ganoderma species in the United Kingdom, the Artist’s Conk (Ganoderma applanatum) and the Southern Bracket (known both as G. adspersum and G. australe), which I touched upon a couple of years back in a post about Dryad’s Saddles . Both types can endure for years, expanding over the seasons to form massive shelves up to 50cm wide and 10cm thick, with woody brown upper surfaces that can look almost indistinguishable from the trees they are growing from and smooth white undersides dotted with tiny white spore-producing pores. They are nigh on impossible to tell apart with any certainty without looking at their microscopic details, except that the Artists Conk sometimes falls victim to the Yellow flat-footed fly (Agathomyia wankowiczii), which forms distinctive galls on these hymenial undersides, while the Southern Bracket is seemingly immune to this infestation. 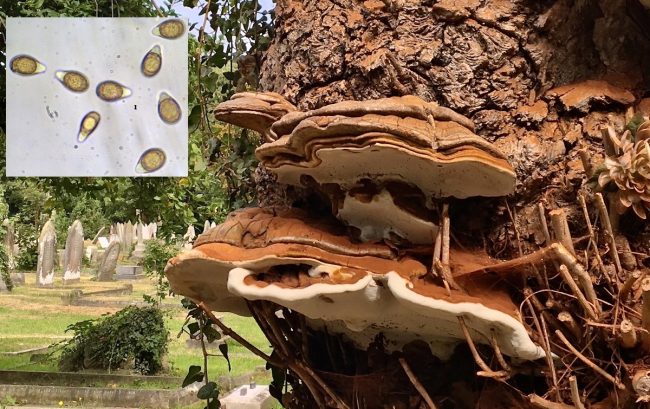 A Southern Bracket (Ganoderma adspersum), in this case identified by looking at its spores.

Of course, assuming you really need to tell the two types apart in the first place, this only really helps in the cases where the conk in question is actually playing host to the Yellow flat-footed fly. I was ultimately able to identify the un-infested one in the photo here as the Southern Bracket by looking at its spores under the microscope, which at approximately 10 x 7 microns (μ) were larger than those described for the Artist’s Conk (and spores tend to be fairly easy to acquire for the Ganoderma types in that they usually settle as a thick layer of brick-orange dust on the woody cap surface).

There are other brackets where a good look at the pores on the underside is by far the quickest way to zero in on a positive ID.  The Lumpy Bracket (Trametes gibbosa), like the Ganoderma species, is a white rot fungus, which means it breaks down the lignin in wood, reducing it to a soft and spongy light yellow or white pulpy mass. You will find its fruit bodies as brackets of about 5 -30 cm in width and 1 - 5cm in thickness appearing on the rotting branches, trunks and stumps of deciduous trees, and it has a particular taste for beech. 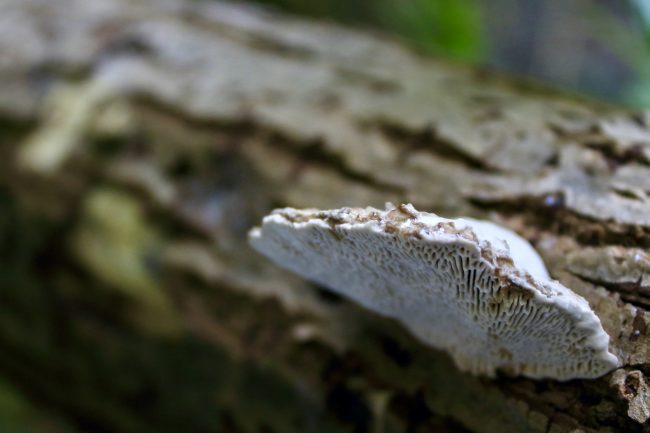 A Lumpy Bracket (Trametes gibbosa), showing the elongated pores on its underside

As the name suggests, these have a crudely rounded and lumpy demeanour to them, although this is not enough in itself to distinguish it from other Trametes species – incidentally, Pat O’ Reilly points out that the name Trametes means ‘thin’, and it is the relative thinness of the fruit body that characterises the members of this genius, although it is plain to see that the Lumpy Bracket is considerably thicker than perhaps the best-known example of the genus, the Turkey Tail (T. versicolor).

Colour goes only part of the way in distinguishing these various specimens. The Turkey Tail is the most characteristic, with its upper surface comprised of multicoloured concentric zones - and no doubt we’ll be revisiting this surprisingly gaudy species in a future post. 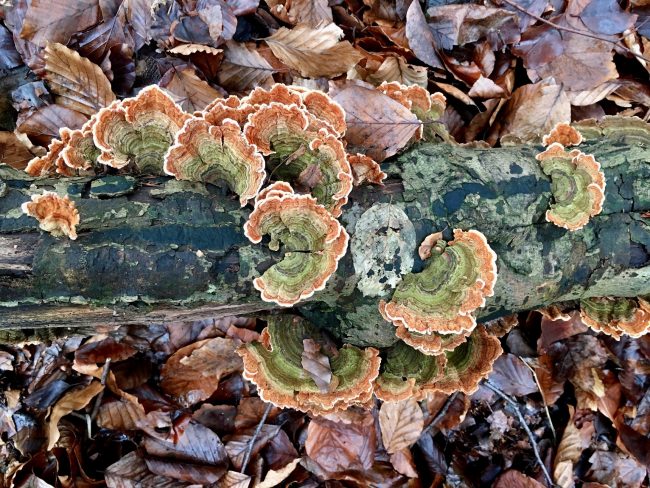 The Lumpy Bracket, in contrast, is a fairly uniform white colour when young, developing a slightly rosy tint around its margins. However, though they fruit annually, the leathery toughness of the brackets, which indeed characterises most of the genus, also means that they can last many months, and so another identifying feature of these is that they develop a green tinge in their centres with age due to the algae blooming upon their upper surfaces.

Another key aspect of the Lumpy Bracket becomes evident when you look at it from below. The pores are long and thin, at about 5mm in length and 1-2mm across according to Læssøe and Petersen’s Fungi of Temperate Europe book. This is a one of the main features that distinguishes it from the other pale coloured lookalikes, such as the slightly smaller and more delicate Downy Bracket (T. pubescens), which also has small fuzzy hairs on its upper side, and the more markedly bristly Hairy Bracket (T. hirsuta), both of which have angular equilaterally shaped pore pits. The Turkey Tail has much rounder, smaller and more densely packed pores (4-5 per mm, according to Læssøe and Petersen). 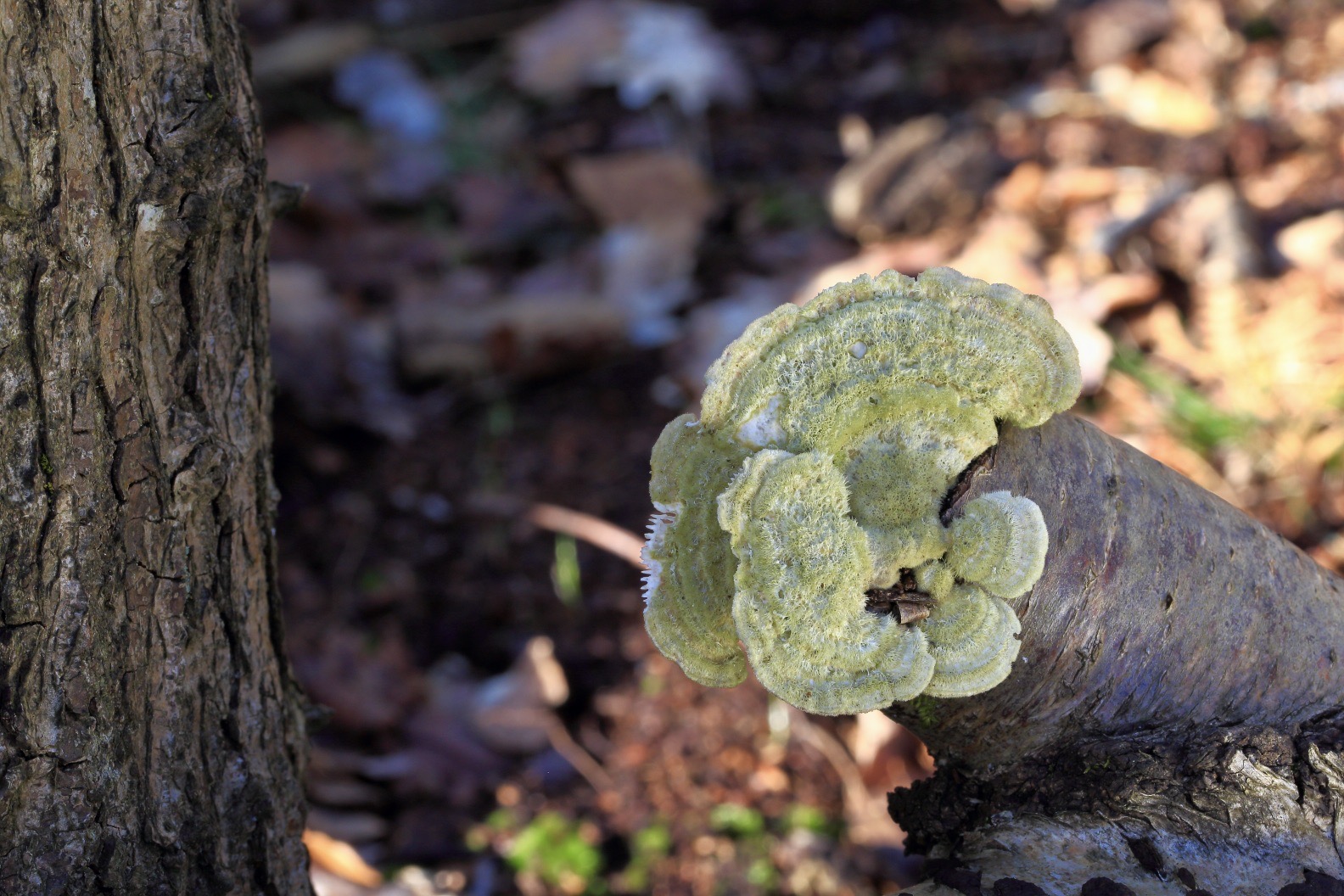 The algal bloom, the felty upper surface and the evident concentric zones radiating from the centre to the margins of a large group of specimens I found growing on birch logs the other day certainly caused a brief pause for thought. At first glance, these could have been any one of the Trametes species described above. But then I flipped over one of the logs and was surprised to discover what looked like a gilled underside, pinpointing the species to a Birch Mazegill (T. betulina) – although the fact that these were sprouting on birch should also have been a giveaway.

It transpires that these ‘gills’, which were more like grooves running all the way from the centre to the margin when looked at closely, were not gills at all, but “gill-like pale cream ‘pores’” according to Læssøe and Petersen – a bit like chanterelle mushrooms where the apparent gills are furrows in the fruit body, and cannot be detached from the actual flesh. The Birch Mazegill is essentially a polypore, as its alternate names of Gilled Polypore and Multicolor Gill Polypore emphasise. 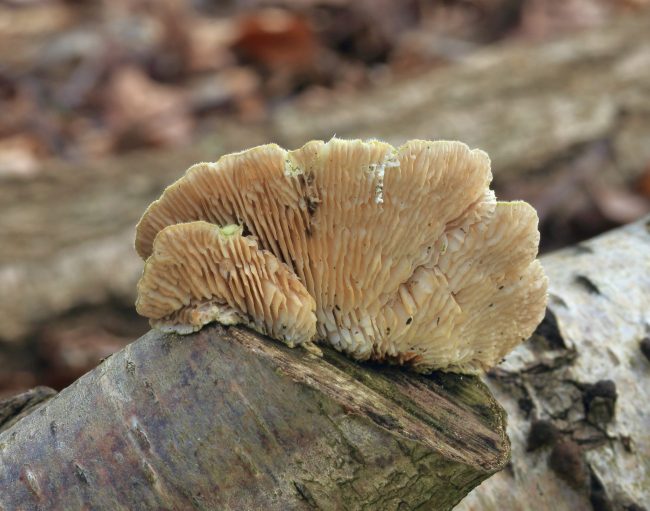 The gill-like grooves of the Birch Mazegill

One further observation from my Birch Mazegill bounty is that quite a few of them were not really growing as brackets. If one tilted their birch log substrates through 90 degrees, you would see them taking on a more resupinate form, the “gilled” pore surface facing outwards or upwards, with no real trace of a pronounced shelf from which you make out the colour or texture of an upper surface.

And this was the point I made in the last post with reference to the example of the Common Mazegill: There is really no genuine division between brackets and crusts in any biological sense, only in the descriptive sense. Many bracket fungi can grow in resupinate form depending on the orientation of the substrate they are growing on, and many so-called resupinates will form shelves if growing from a vertical surface, such as a standing tree trunk, or their edges or margins might raise or curl up from their substrate to form distinct shelves or cap. 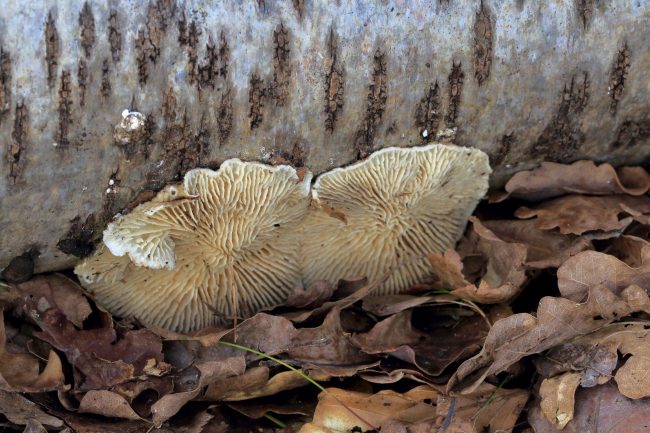 As I’ve just mentioned the Common Mazegill in the context of a post about Birch Mazegills, I should also end by stating that this shared common name does not imply any sort of biological kinship, nor that with other similarly-named species such as the Oak Mazegill – only a vague resemblance. Fungi identification can indeed be a labyrinthine process, but perhaps these more durable and quite different brackets could be the logical next step for May’s fungi focus    ….... 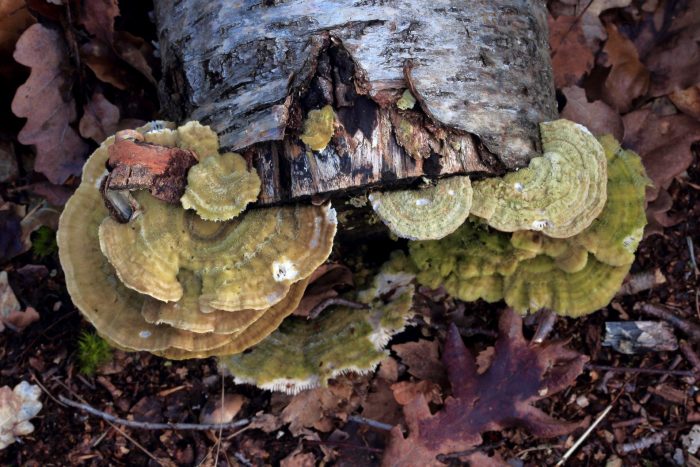