February’s Fungi Focus : Mycophilia and Recording the Fungal Diversity of the United Kingdom

Fungi seem to be enjoying something of a field day in the popular media at the moment. The 2020 documentary Fantastic Fungi, for all its faults, has fanned the flames of fascination in its subject since its appearance on Netflix last year. Startling stop-motion sequence of mushroom growth also made it into several episodes of Sir David Attenborough’s recent BBC series The Green Planet to highlight the centrality of plant-fungi symbiosis to our living ecosystems. This aspect has been thoroughly detailed in the field of popular science writing, with the highly-recommended Entangled Life: How Fungi Make Our Worlds, Change Our Minds & Shape Our Futures seeing the emergence of its author, Merlin Sheldrake, as the thinking man’s Paul Stamets when it comes to discussions of the Fifth Kingdom. There’s been a 3-part series, Fungi: The New Frontier, broadcast on Radio 4 in January, and a volley of no less than three articles appeared in The Guardian in November 2021: ‘The earth’s secret miracle worker is not a plant or an animal: it’s fungi’ by Giuliana Furci;  ‘A powerful and underappreciated ally in the climate crisis? Fungi’ by Toby Kiers and the aforementioned Merlin Sheldrake; and the announcement of an exciting new project in the report ‘World’s vast networks of underground fungi to be mapped for first time’. 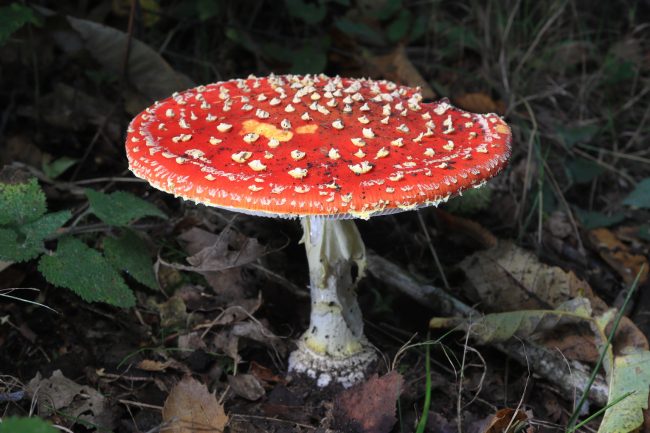 ‘Ectomycorrhizal species like this eye-catching Fly Agaric perform a vital ecological role in our woodland eco-systems.’

Rather than a focus on a specific species this month, I wanted to offer a few thoughts, observations and suggestions about the hows, whys, and wherefores of learning more about  the world of mushrooms and toadstools.

As these examples demonstrate, the importance of fungi and both preserving and mapping its diversity is rapidly becoming a discussion point in the mainstream media, and as in other areas of nature recording such as butterflying surveying and birdwatching, the Citizen Scientist can play an important role in this. Reporting ones finds on wildlife observation websites such as iRecord or iNaturalist can provide invaluable information that can highlight how common a species is, both regionally or nationally, its favoured habitat, and how this might be affected by factors such as changing land use and climatic conditions. For example, I have covered a number of species in these blogs, such as the Crimped Gill or, more ominously, the Hymenoscyphus fraxineus fungi behind Ash Dieback, that were barely reported a decade ago but are now commonplace. 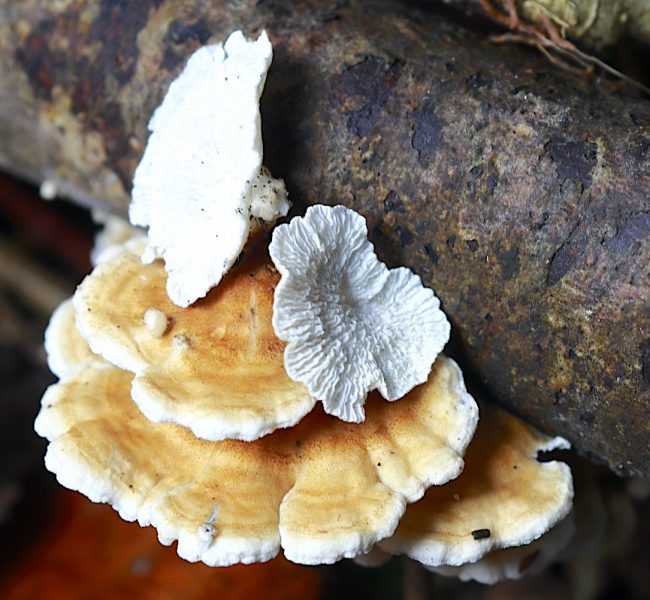 ‘Crimped Gills have become increasingly prevalent across the British Isles over the past ten years, but are still considered “rare” on the recording website iRecord.’

There is a major obstacle in all this though, namely that the domain of common knowledge about fungi is tiny compared with other areas of the natural world. Records with accompanying photographs submitted to these wildlife observation websites of birds, insects, molluscs or mammals are often quickly verified by those entrusted to do such things. Fungi recordings can go for many years without confirmation due to the lack of knowledgeable experts capable of undertaking such a task and a consequently mounting backlog of unverified recordings. 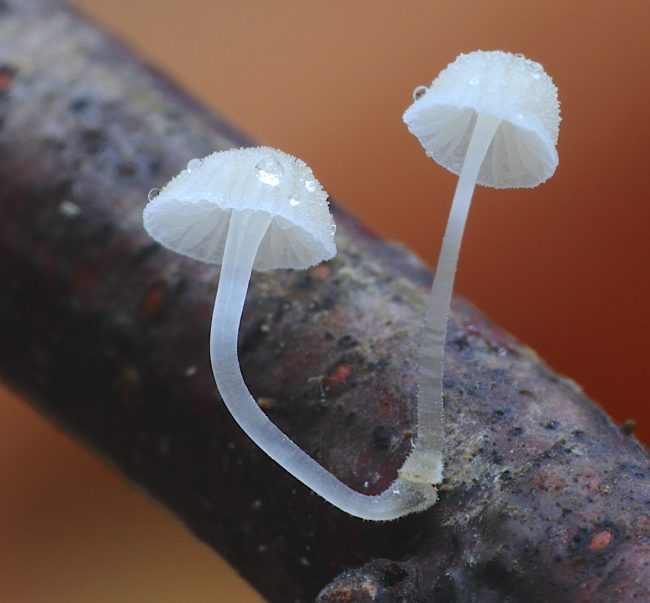 ‘Tiny mushrooms such as this Bark Bonnet (Phloeomana speirea) can be throughout our woodlands all year round, but it often takes incredibly close inspection to confirm your identification.

Of equal, if not of more concern is the danger of the amateur nature spotter misidentifying and mis-recording their finds. It is better not to submit a record at all than an incorrect one, but as these posts have probably shown, identification is often a tricky business. A number of smartphone apps have arguably compounded the situation. Many fungi require close, even microscopic, examination to identify properly, something an app is never going to be able to do. Most only list the most common species, and no matter how powerful the algorithms powering them, they can often be miles off the mark. None, for example, would be able to distinguish from a photograph alone the difference between a Velvet Shank (Flammulina velutipes), and the other two Flammulina species that have been reported in the UK, Flammulina elastica and Flammulina fennae, nor the common Sulphur Tuft (Hypholoma fasciculare) with the Conifer Tuft (Hypholoma capnoides) or the Brick Tuft (Hypholoma lateritium). You would be on a hiding to nothing attempting to identify one of the numerous crusts of tiny disc fungi using such tools. 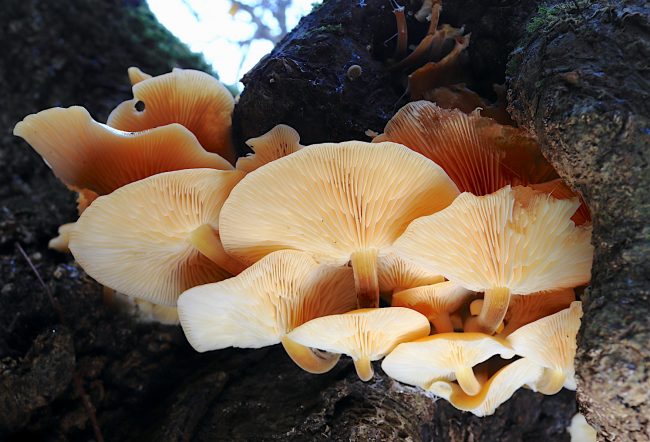 Ready-fix solutions like phone apps have the drawback that they discourage people to put in the legwork of poring through identification guides, such as my 'go to bibles', Thomas Laessoe and Jens H. Petersen’s two-volume Fungi of Temperate Europe or Geoffrey Kibby’s 3-volume (with a fourth one pending) equally impressive Mushrooms & Toadstools of Britain & Europe, and of handling, smelling and generally scrutinising your specimens to really get to know your mushrooms.

Accumulating a library of books such as these can be an expensive business, but if you’re serious about getting into the subject, then the investment soon pays off (at least in terms of personal satisfaction rather than financial reward; mycology is alas a woefully underfunded area at the moment). If you are just getting started, there are also websites such as First Nature, and numerous Facebook groups with people willing to help out with your identifications. That is not to say I personally eschew computer-based solutions completely. The ‘Atlas of Danish Fungi’ website, affiliated with Laessoe and Peterson’s publication, has probably the best ‘Name Suggestions’ from a photograph feature I have come across. I have found it very useful when it comes up with a handful of candidate species to check against more thoroughly in the printed guides. 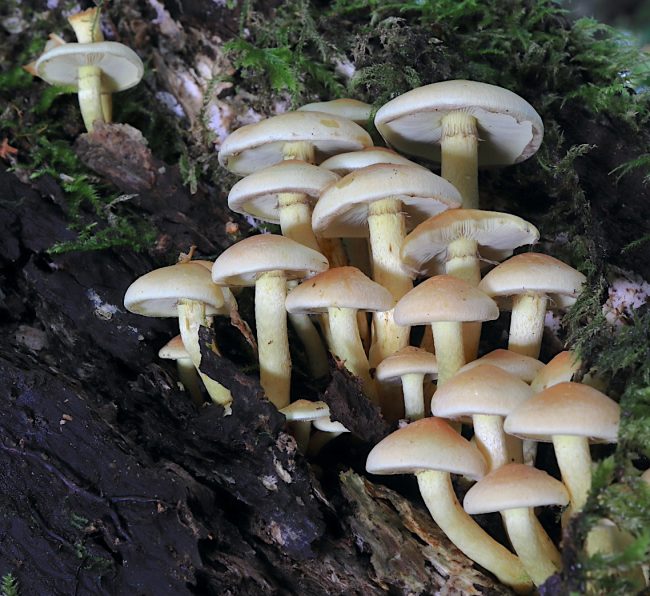 ‘Sulphur Tufts may be one of the most commonly found woodland fungi, but how many records have failed to distinguish it from Conifer Tufts or Brick Tufts?

What the recent flurry of media interest in fungi highlights, perhaps, is the huge disconnect between the scientific knowledge base and research, and the hive or folk knowledge exhibited by field recorders, many of whom have been at it for decades. In fact, so steep is the learning curve, getting newcomers interested in mycology and overcoming the mythologising and misinformation surrounding the subject is a real challenge.

If your curiosity has been piqued and you wish to explore the subject further, firstly I would advise joining the British Mycological Society, and more specifically, contacting your local BMS affiliated Local Fungus Recording Groups, a full list of which can be found here. As the BMS themselves explain, “They are run on a voluntary basis by enthusiasts seeking to share their knowledge of wild fungi and improve your identification skills. Groups offer a welcoming environment for current and new members to enjoy exploring the world of fungi.”

Joining up to your local group offers the chance to learn quickly what’s what in this fascinating field, as well as providing a nice social day out, and a chance to make your own contribution to a subject that is in much need of further exploration. 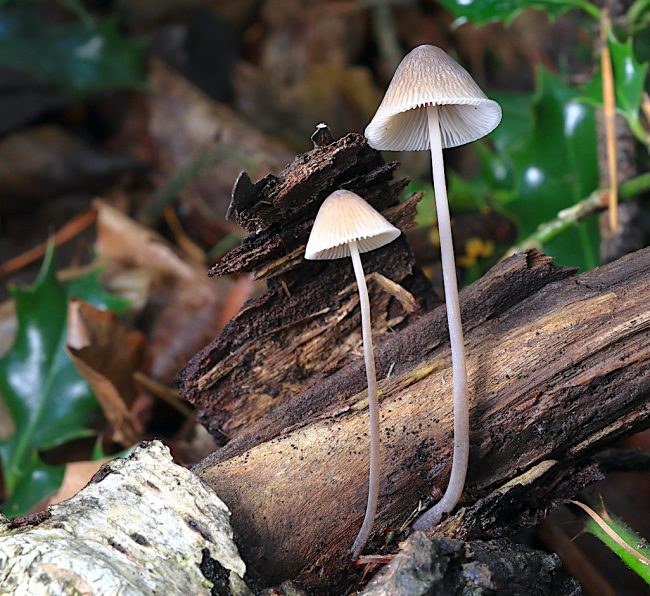 Never underestimate the power of smell - Angel's Bonnets (Mycena arcangeliana) have a distinct whiff of iodine about them.’

Thank you for sharing Jake. This is an interesting paper and certainly draws attention to what we don’t know and should know about fungi with regards to tree planting. I did pick up on a slightly negative aspect though, which is the comment “Despite these gaps in our knowledge of airborne fungal spores, it is clear that they can cause a range of human diseases, with allergenic diseases such as childhood asthma being the most common” – as far as I’m aware, such respiratory disorders are more likely caused by household moulds such as Chaetomium, which grow in damp dark conditions, rather than the vast majority of those found in our wooded areas. I’m not sure of the statistics, but I believe fungal spores have always been in abundance in every lungful of air we breathe, and this is undoubtedly more so in our woodlands, so this seems like something of a false scare. Similarly “Fungi cause the most plant disease of any group of organisms and are responsible for a number of severe tree disease outbreaks in the UK in the past 50 years” is true for the case of the cited cases of Ash Dieback and Dutch Elm Disease, and I’ve eluded to this problem in a number of posts on this blog of importing plants, but again, I do think the negative impact of fungi on trees is overstated with many more having a more beneficial relationship. It’s a case of keeping nature in balance, but again, much more research is needed.

Interesting paper on The importance of fungi in the context of UK tree planting https://onlinelibrary.wiley.com/doi/10.1002/fes3.371