In many gardens across the country, people ‘feed the birds’.  On bird tables and other structures, they put out peanuts and various ‘wild bird’ seeds, fat balls or other high energy offerings (sunflower seeds, ‘suet cakes’). Over the years, bird food and the provision of feeding stations have changed significantly.

It has been estimated that possibly up to 60,000 tonnes of peanuts and other seeds are placed in gardens each year - a “bird-care” facility valued in millions.   Unsurprisingly, these offerings are supporting rising numbers and types of birds - over a hundred different species are thought to have benefitted from these garden offerings - even species like the great spotted woodpecker or the sparrowhawk.

Back in the 1970’s, garden feeders attracted mainly sparrows and starlings, they accounted for over half of the birds observed.  But more recent surveys have revealed a very different pattern of visitors.  Robins, chaffinches blackbirds, and great tits have maintained their presence at urban feeders, but many that were rarely seen in gardens have been tempted in by the fat balls and other ‘treats’. 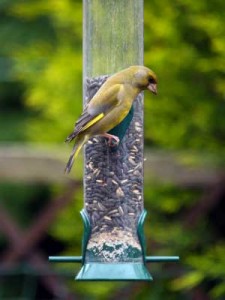 Back in the 70’s, goldfinches were recorded at just 8% of garden feeding stations,  but within 40 years they were seen at 87% of them. A similar pattern was seen for wood pigeons and long-tailed tits.  Great spotted woodpeckers, magpies, pheasants and nuthatches have also increased their visits to gardens.

The provision of winter food has helped a number of migratory species, like the blackcap, to cope with our winter (becoming a winter resident since the 1950s).  So many species have benefitted from the provision of garden food, but the greenfinch has not. The greenfinch population has fallen because of trichomonosis, a disease that has been shown to spread at feeders.

To an extent, the offering of food in gardens across the country has helped to offset the loss of ‘natural’ food resources.  For example, in the past there was spilled grain in harvested fields but increased mechanisation has lead to less ‘waste’.   The number of hedgerows filled with nuts, fruits and berries has been dramatically reduced as they have been uprooted to form bigger fields for the larger tractors and combines.  Gardens can provide a safe place for food and a haven for many species of birds - though the domestic cat is often a threat through its hunting activities.

pammsymons@gmail.com
Thanks for the interesting statistics. We are having to put out more food year on year to keep up with the demands of our garden birds (and their offspring). Sunflower hearts In the feeders brings in the greatest variety of species, with siskins and goldfinches rapidly increasing in numbers. Greenfinch numbers are very encouraging – regular use of Ark-Clens gives reassurance re disease spread.

RSPB “No-Grow” ground mix is highly desirable for most species (we use a ground cage with holes big enough for blackbirds) and ensures that there is not a problem with unwanted germinating seeds. Wood pigeons and collared doves manage to get their share by extending neck through the grid holes. Always good to know that our investment is offsetting loss of habitat as well as bringing joy to the observers!