Fungi that ‘need’ a fire

When a fire rages through a woodland or forest, lots of ash and other ‘material’ is left on the ground.   From this debris, fungi are amongst the first forms of life to appear.  Often these are the fruiting bodies of what are termed pyrophilous fungi.  That is to say, they are fungi that cannot complete their life cycle without a fire and shortly after a fire,  their fruiting bodies - the mushrooms appear.   Quite how and where these fungi survive in between fires has long been debated.

Now some answers have been provided by mycologists at the University of Illinois.  It would seem that in between fires, these fungi ‘hide’ in mosses and lichens. The Illinois mycologists proposed that the fungi were present in the structures of various mosses and lichens and the burning of their ‘home’ initiated a reproductive phase of development.

To test their working hypothesis, they collected soil samples, mosses and lichens from burned and unburned areas in the Great Smoky Mountains National Park.  The samples were surface disinfected to remove any spores etc that might have been present on the outside, but then the lichens and mosses were examined in detail to see if the fungi were indeed present within their structures. 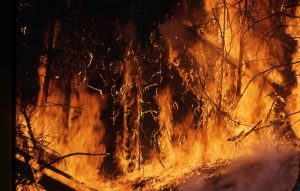 One ‘fire-loving fungus’ - Pholiota highlandensis, was cultured from various moss samples and DNA studies confirmed the presence of other pyrophilous fungi in various moss and lichen species.  The mosses and lichens may be acting as ‘protective shields’ that burn away during fire, but allow the fungus to survive.  The soil temperatures during a fire would see a reduction in the number of other micro-organisms in the soil, so the lack of immediate competition would favour the pyrophilous fungi - as would the increase in soil alkalinity.  It is known that pyrophilous fungi ‘prefer’ more alkaline condition for spore germination and growth of the mycelium (compared to other soil fungi).

Pyrophilous fungal DNA was also found in the burned and unburned soil, so it is quite possible that their spores persist in the soil for long period of time but the fungi will only form fruiting bodies (sporocarps) after a fire.  Quite what the exact trigger for this behaviour remains to be determined.