The ‘progress’ of the horse chestnut leaf miner (Cameraria ohridella) has been reported in the blog from summer 2006 to more recently, when a national survey was under way.  This small, but highly efficient parasitic moth was first ‘discovered’ in trees bordering Lake Ohrid in Macedonia in the mid-Eighties.  It was later described as species new to Europe, and since that time has managed to spread through almost all of Europe.

There has been a debate as to whether the moth

However, work on sheets * (with preserved specimens) of horse chestnut leaves from various herbaria have established that the larvae of the moth were present in foliage dating back to 1879; these early specimens were collected in Greece – a century before they were suspected to be present in Europe!  DNA analyses of the various specimens confirm that the moth has its origins in the Balkans – effectively quashing the introduction and host switch hypotheses. 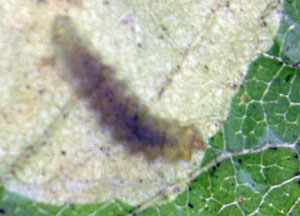 These recent studies of this moth (Cameraria ohridella) demonstrate the relevance and importance of herbaria in studing plant/insect interactions, past distributions of plants and their parasites and the origins of invasive species.   The leaf miner probably existed for centuries in remote sites in the Balkans, but with the development of roads / transport – the moth was able to ‘escape’ and spread.

* by David Lees (an expert on moths and butterflies at the Natural History Museum and the National Institute for Agricultural Research, France and H Walter Lack (Botanic Garden and Museum, Berlin)

In recent years I have I have noticed two large horse chestnuts one near home in Shropshire and one 20 miles away in Worcestershire. Both have shown an increase in leaf miner damage and the one in Shropshire has certainly had smaller chestnuts. I was interested in leaf miner as one species always caused considerable damage on chrysanthemums.

[…] are being ‘mixed’ up as worldwide travel by train, boat and plane increases year by year.  The woodlands’ blog has reported on a number of plants and animals that are regarded as ‘aliens’ or invasive […]

Controlling an infestation can be difficult, the easiest way to slow infestation rates is to remove and then preferably burn fallen foliage.
http://www.pjcconsultancy.com/blog/?p=191

PS
There is also a pdf file available from the FC – it has some further information on control, other than hygiene – sweeping up and removing leaves.
http://www.forestresearch.gov.uk/pdf/horsechestnut.pdf/$FILE/horsechestnut.pdf
but do seek local, qualified advice.

See http://www.forestresearch.gov.uk/website/forestresearch.nsf/ByUnique/INFD-6Q3DPF
but it is always good to take advice from a qualified arboriculturist.

We have recently noticed that our large horse chestnut tree has developed the leaf discoloration that your photos identify as an attack by the leaf miner moth. Is there anything we can do to help it?