Crust fungi is a generic term referring to those species that grow flatly in patches that spread out against their substrate, typically on dead wood such as logs (on the side and underneath), or on stumps and fallen branches, although a merciful few may appear as unwanted guests in domestic settings, like the notorious Coniophora puteana (“Wet Rot”). Examples of crust fungi can be found throughout the whole year, but a few species are particularly noticeable around the winter months, when there’s little else of apparent interest around.

The term ‘resupinate’ is often used to describe these types, which means that the fertile surface, or hymenium, from which they release their spores faces outwards, unlike conventional cap-and-stem types, where the hymenium is spread out over the gill area and faces downwards from beneath the cap. 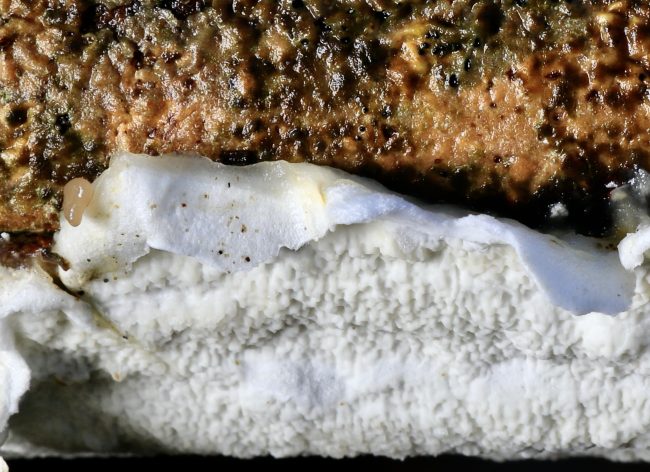 With many of these species also forming shelves, with their uppermost margins projecting horizontally depending on the orientation of their substrate, some often find themselves described also as bracket fungi: indeed, a Facebook group dedicated to their identification, recording and photography is called Crust Fungi and Polypores. The most salient example is the Hairy Curtain Crust (Stereum Hirsutum), which is a common sight in broadleaf woodlands in January and February. (Note however that the terms ‘resupinate’ and ‘bracket’ are just descriptive categories which don’t have any meaning when ordering the various species in strict biological terms.)

Crusts don’t have gills, but the hymenium can either be totally flat, in species described as corticioid, or it can be covered in pores, as for example species like the Cinnamon Porecrust (Fuscoporia ferrea). They also might be covered in warts, wrinkles, teeth or fine hairs that you might need a hand lens to discern properly. Different species can be a variety of colours (including salmon pinks, vibrant yellows and fiery oranges to the more nondescript white and not-quite white types), while other distinctive features might be their toughness, thickness, and how easy they are lifted from their substrate. I’ve covered a number of these different forms in more detail in previous posts on Elder Whitewash (Hyphodontia sambuci) and my rare find of Antrodia carbonia, as well as those linked already in this post. 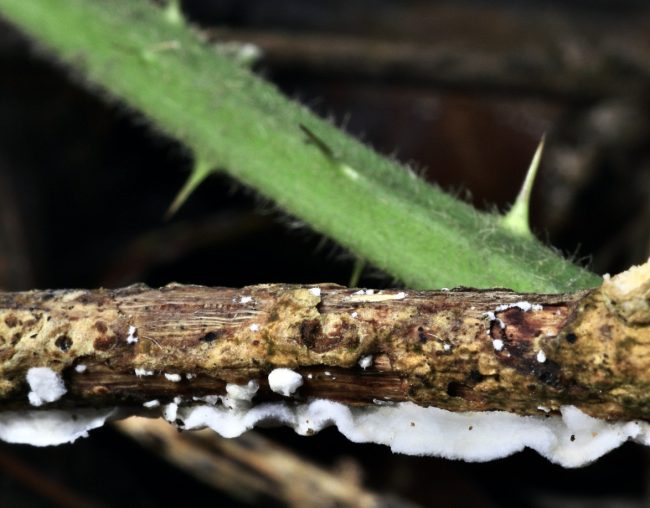 Identifying crust fungi can be a daunting business, with literally hundreds of species in the British Isles alone. Most might be happy to pass them by unnoticed. After all, they have no culinary value. This makes them a much understudied groups of fungi among amateur naturalists. For those that care to take a closer look however, the can do show up some very attractive aspects.

The Netted Crust is one such example. It is very prevalent during the early part of the year and relatively easy to recognise. From my experience, it tends to grow on, and indeed along, fallen branches and twigs that are quite thin, with the hymenium facing down but the margins of the fruitbody projecting outwards in long extended wings, a bit like a flatworm.  On thicker branches, it might also form brackets. 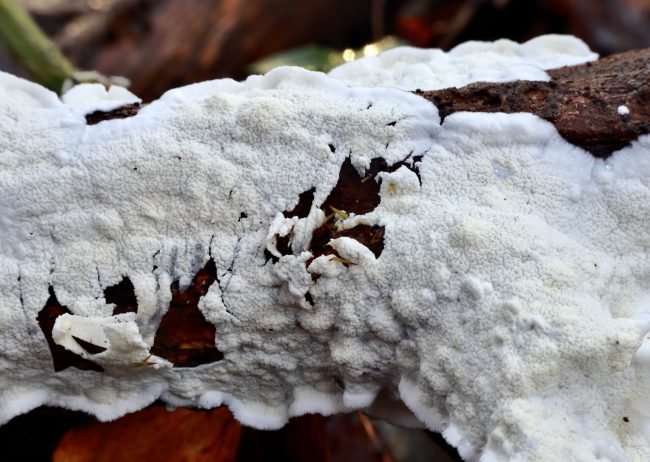 The flesh is white and soft: it is easily torn and removed from the branch, although with age becomes tougher, with the underside hymenium also tinging yellow-brownish. The upper side, if looked at closely is covered in fine downy hairs, which you might need a hand lens to see properly.

It is, however, the underside where this species really shows off its most magnificent aspect. It is covered in a much more discernible intricate pattern of low, irregularly shaped grooves and ridges, a surface that mycologists refer to as ‘meruloid’ – hence the ‘merulius’ part of its Latin name, Byssomerulius corium, and the ‘netted’ part of its common name. 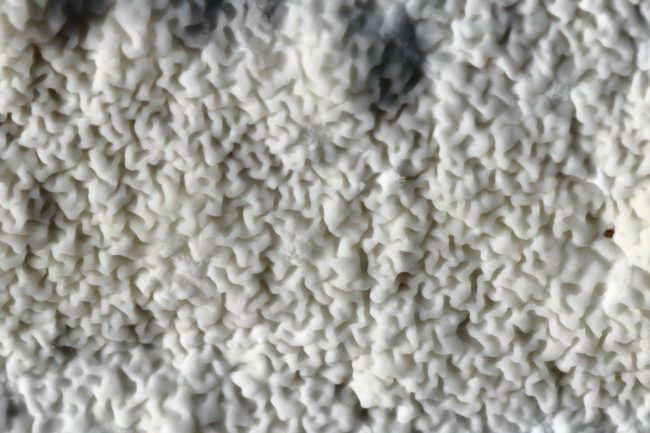 The Netted Crust is one of the most commonplace and readily identifiable of the crusts, and as such provides a wonderful gateway into looking more closely at this surprisingly fetching domain of fungi. As ever in the woodlands, it’s a case of look closely and you’ll find a whole new world of interest, and undoubtedly one of the best points about resupinate fungi is that you can find them across the entire year. 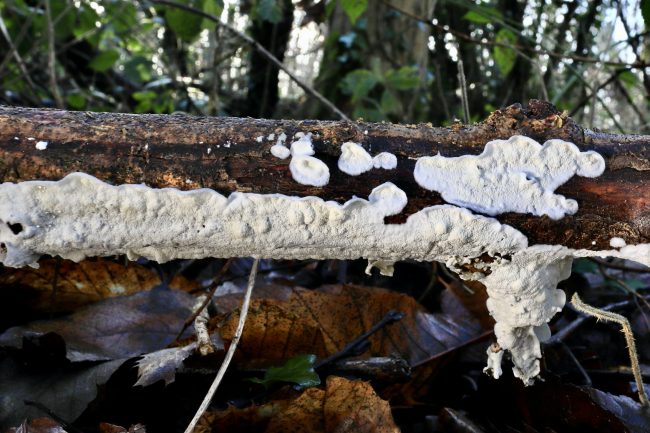 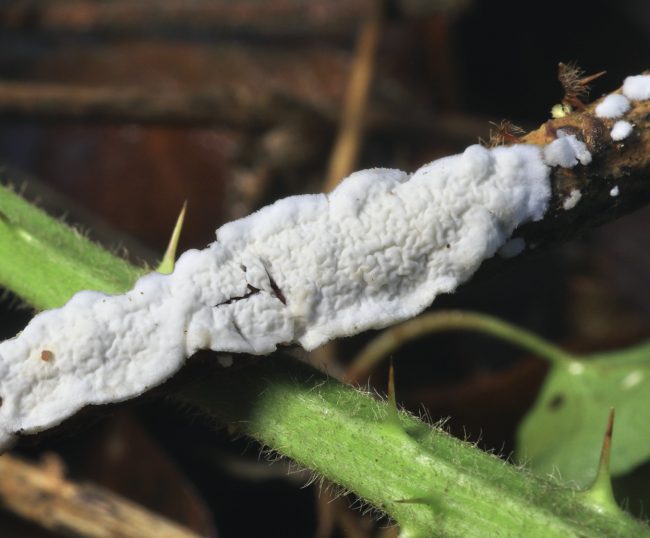