It is worth mentioning that while the majority of the hard pyrenomycetous fungi that are the subject of this two-part post are decomposers of dead wood, and therefore invaluable to any woodland ecosystem, there are types that are less benign. For example, one might question why anyone would need to be able to identify the 90 species of Rosellinia, none of which have a common English name and are nearly identical in all aspects aside from their dimensions, until one realises that a number are serious pathogens. Rosellinia desmazieri, for example, can attack living willow trees. There’s a tropical species called Rosellinia bunodes that causes black root rot on a wide range of cash crops like coffee and bananas, while closer to home we have Rosellinia necatrix, another root rotter. 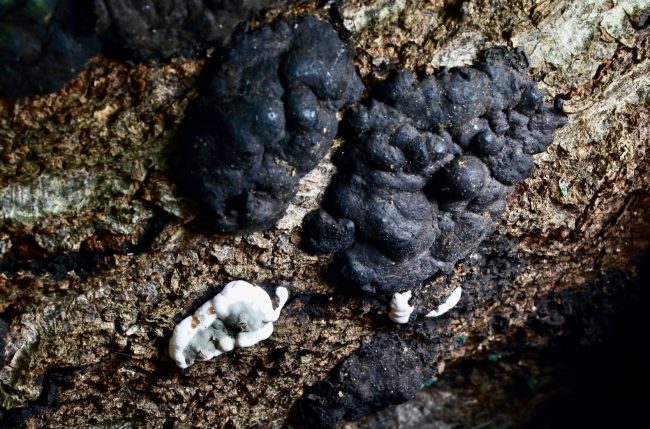 "The notorious beech tree killer Brittle Cinder (Kretzschmaria deusta) showing early immature stage in lower left corner before it develops into the thick black and very brittle stromata next to it.

In terms of the stromatic ones, you’ll certainly want to keep your eye out for Kretzschmaria deusta, also known as Brittle Cinder, a serious pathogen that has caused many a beech tree to topple. It is often seen at the base of the tree, initially appearing as a white soft crust with an ashy grey centre around March time, before turning a less conspicuous charcoal black. The texture and the thickness of the stroma is the key to identification here – as its name suggests, it really is brittle and easily crushed into a powder. 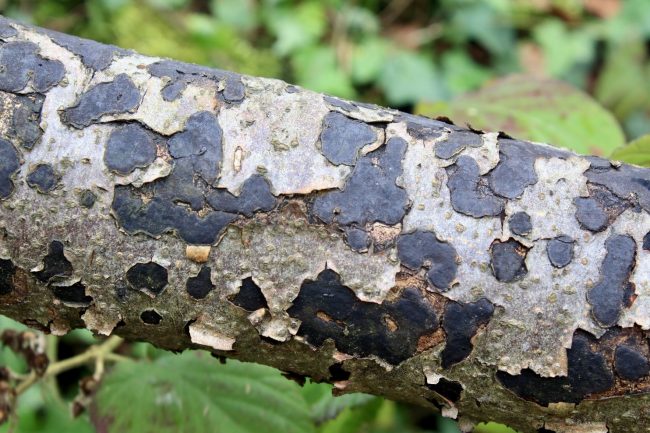 Effused and erumpent, the Common Tarcrust grows in spreading patches that can fuse together beneath the bark before emerging to visibility

For other means of identification of the easier types, beyond looking at the host tree, I want to introduce two new words: ‘effused’ and ‘erumpent’. Effused basically means that the stroma spreads out in various patches that can bleed into one another. A great example of this is Common Tarcrust of Diatrype stigma, which is also very thin, fragile and flaky, so difficult to remove from its host substrate in one piece. Erumpent is a delightful word that I wish I could slip into everyday conversation a little more often, but basically describes stromata that develop beneath the surface of the substrate rather than on top of it, breaking through the surface as they mature. Using the Common Tarcrust as an example once more, you will see the spreading black surface of the stoma grows on the wood of the branch itself, beneath the bark, which it will eventually force off. 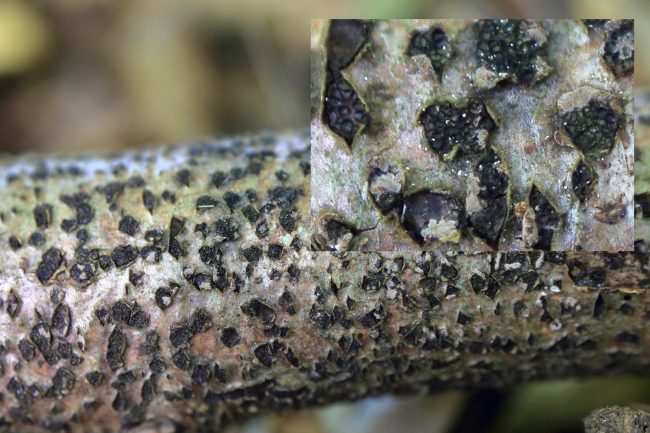 There are a number of other ways of distinguishing between individual species. One of the most fun is simple chemical testing. While I’ve mentioned that most appear black, they do have various underlying hues, to varying degrees, depending on the subsurface pigments contained within the stroma, which fade with age (Birch Woodwart is described as “red-brown to black”, for example). These pigments can be released by placing a piece of the stroma in a 10% or thereabouts solution of potassium hydroxide (KOH), a chemical that is fairly easy to acquire. This solution will turn brown for Birch Woodwart stroma, orange-red for Beech Woodwart, whose stroma begin this sort of colour in the first place, and a dramatic deep purple for King Alfred’s Cakes. Species in the genus of Rosellinia, Nemania and Diatrype don’t contain pigments released by KOH testing, so Common Tarcrusts, to name but one example, won’t produce any interesting colours. (To avoid confusion, I’m limiting the different genus types I am focussing on in this post to because there are quite a few more, and as mentioned, most species don’t have common names). 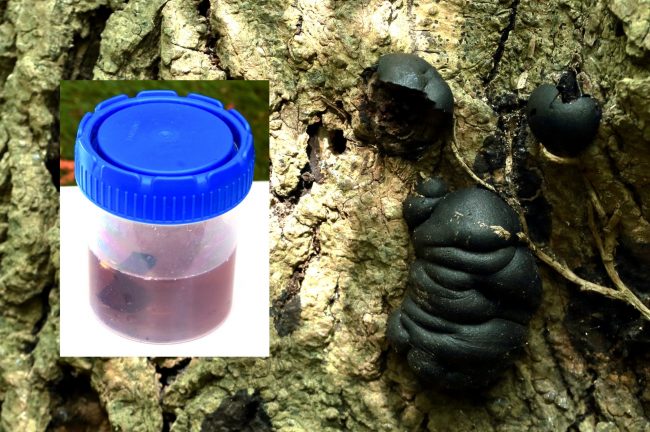 For more exact confirmation down to species level, you’re often lost without a microscope, so need to zero in to spore level. On the assumption that most readers here might not have access to a microscope capable of 400x magnification, I’ll just sketch out a few basic features of the pyrenomycetes spores (First Nature have a great piece on Microscopes and the Amateur Mycologist). Most types discussed in this post have relatively large rugby-ball shaped spores, which are slightly lopsided to varying degrees, are brown in colour and have a conspicuous slit running down one side. When I say  “relatively large”, King Alfred’s Cake spores are 12-17 x 6-9µm, while Beech Woodwart are 10-15 x 4.8-6.8µm– that’s considerably bigger than the skinny banana-shaped spores, with two tiny drops at either end, of the Common Tarcrust, at 6-10 x 1.5-2µm, their pale cream colour making them even more of a challenge to see properly under the microscope. Measuring the length and width of the asci is also useful, although these can be very fiddly to get out and onto a microscope slide – you have to slice a very thin section off the top of the stroma to get access into the perithecia and then wiggle a pin around in it to try and ease the microscopic asci containing the spores out onto the glass. 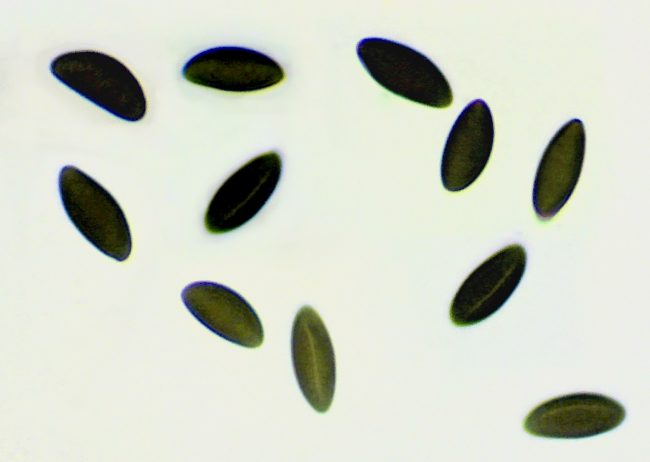 If you really want to go in this deep, one marvellous web resource is Pyrenomycetes from Southwestern France, by which was able to identify a recent Rosellinia find as Rosellinia britannica , as the perithecia were “scattered to gregarious, rarely fused together, dark brown to black, carbonaceous, hemispherical with usually flattened top and broadly attached base, 0.7-1.2 mm diam x 0.5-0.9 mm high, mostly 0.8 x 0.7 mm; host surface usually blackened around the stromata”. The spores were also around the right size of 22-27 x 7-9.5µm, but a further key to the identification is provided by the germ slit, which ran across the whole length of the spore on the less convex side and was “slightly sinuous, often slightly oblique”. The germ slit’s length relative to the length of the spore, its positioning and its waviness are all very vital factors in pinpointing what species you might have found. 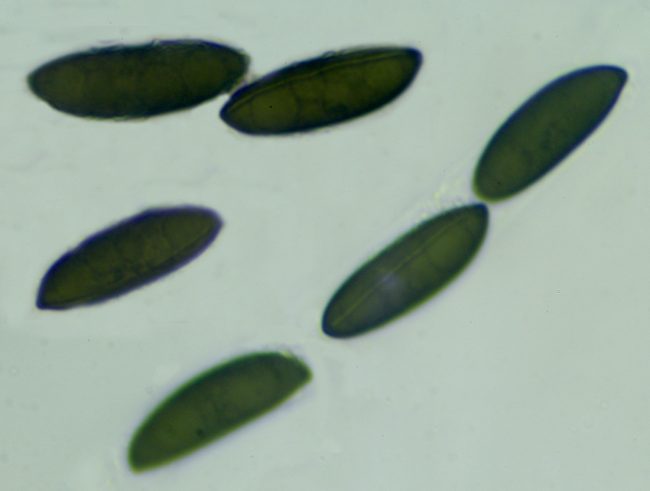 Rosellinia britannica spores showing the germ slit running the length of the less convex side, slightly sinuous and slightly oblique

As an example of the interconnectness of nature and how everything has a purpose, even if it is not immediate apparent or observable, I will end by coming full circle to a pyrenomycetous fungi that is not stromatic, nor indeed even hard, black and carbonaceous, but is itself dependent on a hard, stromatic pyrenomycetous fungi for its survival.

Just a few weeks ago, I was testing the capacity of the macro lens on my camera on a Common Tarcrust to see just how clear a picture I could get of its ostioles, to see whether they were raised, flat or indented (Laessoe and Peterson, for the record, describe them as “flat or somewhat raised and star-shaped.”) When I got home and looked at the photos on my monitor, I noticed a patch of tiny red spheres growing around the ostioles, too small to really observe clearly. 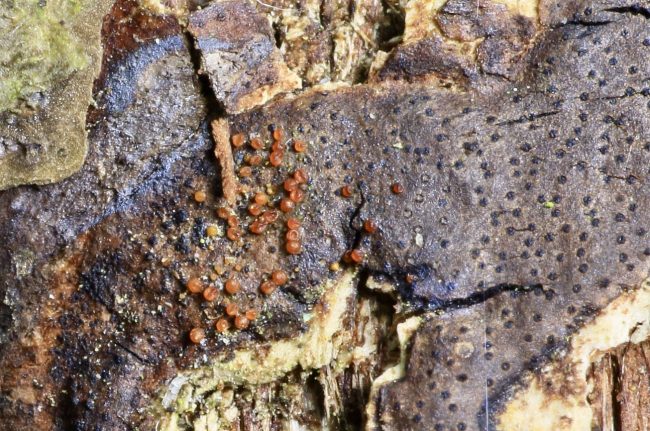 I returned just a few days later to see if I could get a better picture. Trying to locate these small dots in the first place proved problematic, the very definition of tracking down a needle in a haystack. I am guessing they must have been around 0.1mm in diameter, and certainly too small for my eyes to detect. A younger and keener eyed companion did manage to spot their specks and directed my camera towards them, but even pushing my macro abilities to the very limits, a decent shot proved impossible. I instead took a sample home to get a shot through my microscope, which in itself proved a challenge as Common Tarcrust is exceedingly brittle and kept shattering every time I tried cutting off a small piece of it.  But sure enough, my suspicions proved correct when I got it home. I had found Dialonectria episphaeria, a tiny species in its own right that grows specifically around the ostioles of Diatrype species such as the Common Tarcrust. 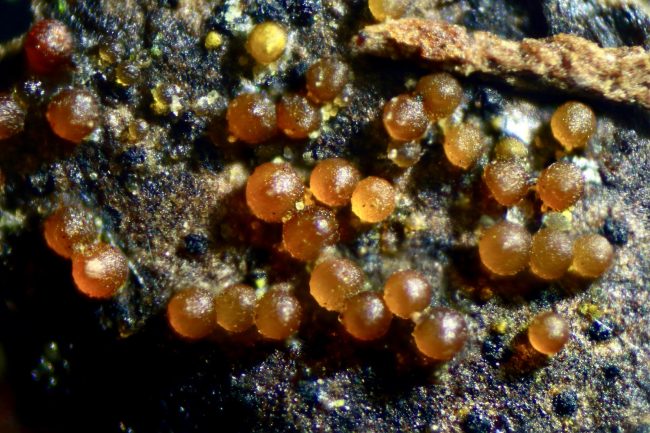 I’ve mentioned small fungi that are parasitic on other fungi in a number of previous posts (see for example last year’s piece on the Bolete Eater ). It is always incredibly excited to find them in one’s backyard, so to speak, knowing that no one else could possibly have noticed them, and realising that even something as seemingly mundane as a Common Tarcrust possesses an immediate value to other forms of life that most of us barely take time to appreciate.

Hi Anita, sorry for the late reply. It sounds like what you are observing are the rhizomorphs of Honey Fungus (see https://www.woodlands.co.uk/blog/flora-and-fauna/armillaria-honey-fungus/) – the thick chords of combined hypha that give it its alternative name of Bootstrap fungus.

This is generally not considered good news for gardeners of woodland owners, as Honey Fungus is a plant pathogen that can kill a tree (presumably what finished off your beech). The problem is once you’ve got it in your soil, it’s very difficult to get rid of. I’m tempted to say it’s not quite the disaster some people make it out to be – it will only really kill a tree that is already sick, stressed or weakened, and otherwise will be content in feeding off the dead wood in the tree rather than attacking it and killing it. That said, you wouldn’t want to spread it any further than necessary, so I would avoid putting it in your compost or using it as mulch and instead burn it.

I wonder if you could answer a question for me.
I am clearing an area for planting in which there are large pieces of trunk from a Beech tree which fell about 7 years ago.
Parts of the wood are now rotted down like compost beneath the bark, but here is a huge amount of a very black lacy network of fine but strong stands all the way the the wood.
In areas where it is not totally rotted down the light coloured wood is almost jelly like, oozy and wet.
There a a few external patches on the bark of a rock-hard black slightly lumpy deposit.

My question is whether it is safe to put this in the compost heap, or to use the rooted parts as mulch around plants or could this be a fungus which could infect other trees of plants?
I would be very grateful for any input
Thank you

Absolutely fascinating. Have you ever thought of your self as a tree dermatologist?