I have a love-hate relationship with russulas, the eye-catching, colourfully-capped mycorrhizal mushroom types known commonly as brittlegills. I love it when you chance upon a pristine specimen that has been unmunched upon by insects, slugs or squirrels. It seems impossible to resist the temptation to get down to ground level and take a snap. I hate the subsequent task of attempting to home in on an identification so you can put a label to the resulting photo.

Identifying russulas is a painstaking process: determining which of the nearby tree species’ roots in a mixed woodlands it might be forming a mycorrhizal relationship with; in which range of hues does the highly variable cap colour fall within; sniffing to detect if there’s any hint of an aroma such as coconut or crab or strewed apples that goes beyond the simple description of “mushroomy”; the nibble-and-spit test to gauge whether its taste is peppery, acrid or bitter, or any of the other vague categories in between; the thorough examination of physical features such as gill spacing, stem width and how far the cap cuticle peels towards the centre; the rubbing with Guaiac and iron salts to see what colour the flesh changes... And this is before we even get to the microscope stage. 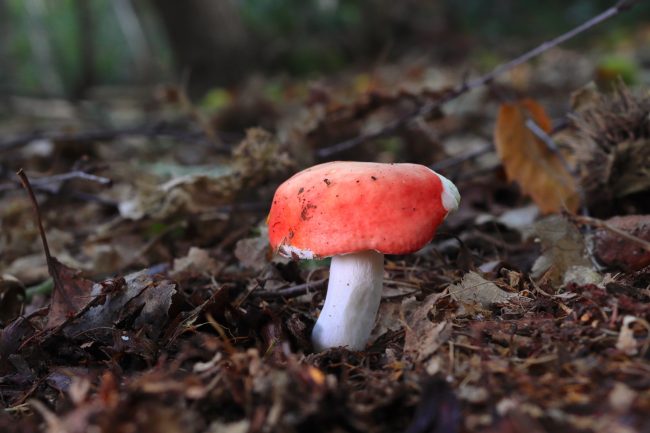 The Woodland Brittlegill, Russula silvestris, is one of many red-capped brittlegills that need much closer inspection to identify correctly

Yes, it takes many years in the field to get one’s head around the 200 or so species of brittlegills that have been recorded across the British Isles. Nevertheless, there is one that is not only almost conspicuous within this genus by its utter drabness, but the remnants of its fruitbody, once it has fulfilled its spore-distributing process, leave one in little doubt as to what it is.

That is the Blackening Brittlegill (Russula nigricans), whose fruiting bodies are quite a bit larger than your average russula, getting up to around 20cm across as they expand and flatten out. They start out a grimy off-white colour before darkening through an ever-darkening range of slightly greenish greys and browns before eventually turning completely black. Unlike most fungi fruitbodies, these blackened caps don’t just turn to mush and rot back into the ground. They dry up so as to appear mummified, and you can find their black husk-like remnants lying around for months after the main fruiting season, often well into the following year. 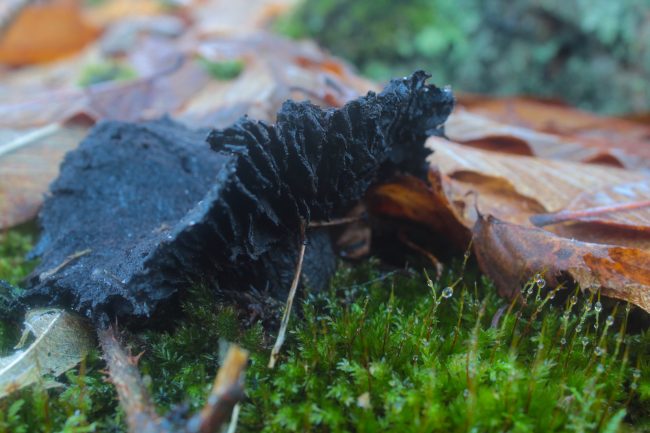 The 'charred' remnants of the Blackening Brittlegill, Russula nigricans, distinguishable due to its relatively wide gill spacing as much as its black colour

The Blackening Brittlegill might seem pretty unique then, except that the mycological world is never that simple and the world of russulas even less so. In fact, there are a number of other species that blacken and desiccate in much the same way. The Fungi of Temperate Europe (2019) refers to them collectively under the category of ‘charred russulas’, and lists Russula adusta, Russula densifolia, Russula albonigra and Russula anthracina.

The British Mycological Society website includes common names for some of these: R. anthracina is the Coal Brittlegill, in obvious reference to its colour, while R. adusta is the Winecork Brittlegill, as it reputedly smells of empty wine barrels. R. densifolia is the Crowded Brittlegill, due to its tightly packed gills – something which distinguishes it from the Blackening Brittlegill, which has unusually widely spaced ones. When it comes to the taste test, R. acrifolia has hot peppery gills, earning it the memorable title of the Hotlips Brittlegill. 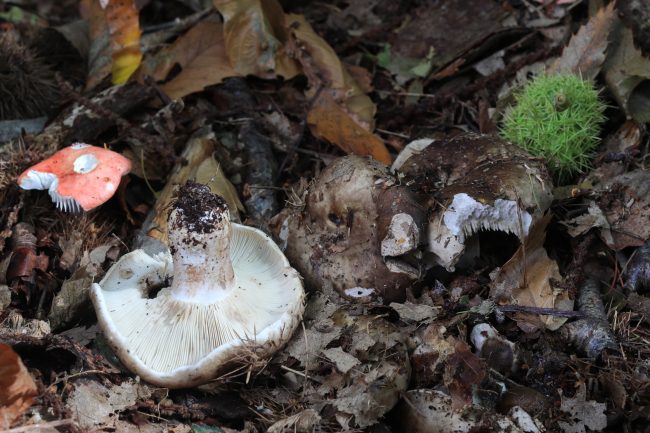 Other features distinguishing these various species include the way the inner flesh colour transforms from their original white when a fresh mushroom is cut in half: R. adusta, R. densifolia and R. nigricans for example turn red then black, while R. anthracina goes straight to brownish black.

But let us not get waylaid by any of this, because the main reason for covering these charred russulas this month is due to the way that these or carbonised cap remnants serve as mini ecosystems in their own right as they persist beyond the initial fruiting stage. Look closely and you’ll see them crawling with near microscopic bugs and larvae, and beyond the scope of the naked eye, they swarm with bacteria and other microfungi. This is the case for many decaying fungal fruitbody, it is true, but the charred russulas also provide the substrate for two more conspicuous species of fungi – the Silky Piggyback and the Powdery Piggyback. 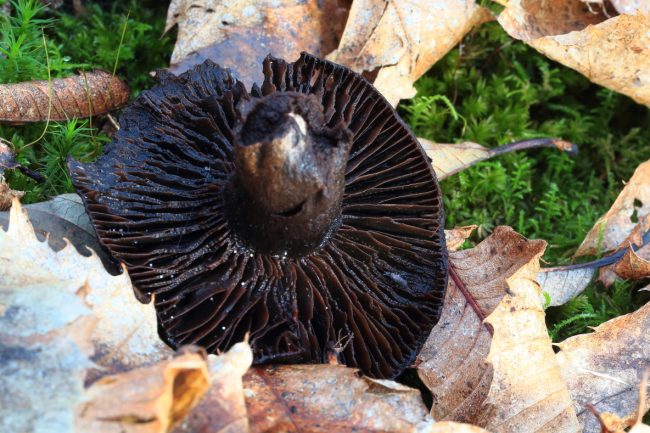 I’ve covered a couple of examples of fungi that specifically grow on other fungi in my previous posts on the Bolete Eater, which forms a fishy-smelling bright yellow mould on certain bolete species, and the Common Tarcrust, which plays host to the tiny orange spheres of Dialonectria episphaeria. There’s also a more obviously mushroom shaped example in the form of the Parasitic Bolete (Pseudoboletus parasiticus), which grows out of or in association with earthballs as part of a relationship that doesn’t seem to be clearly understood.

However, I don’t think you can find a more striking example of such mushroom-on-mushroom weirdness than the two Asterophora piggyback species. Both are dainty little types that have a similar form and colour to your basic supermarket button mushroom, although their caps only rarely get much bigger than 2cm in diameter and the stems are relatively longer and thinner. The gills of both start off white, then turn brownish. 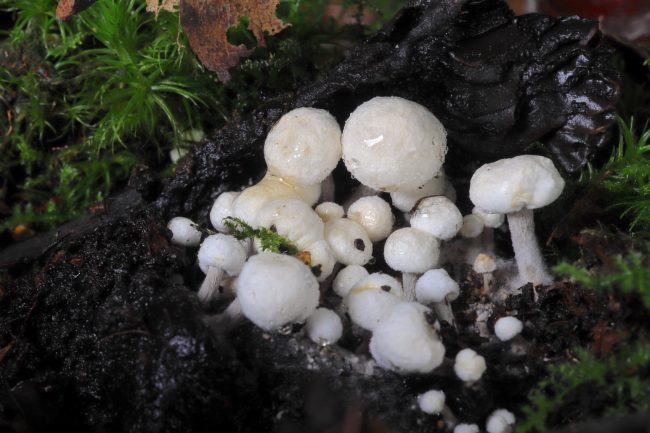 The two are pretty similar unless you look very closely, and even then it is not always clear. The cap of the Silky Piggyback (Asterophora parasitica) is fibrous, giving it the silky appearance that gives it its name. The Powdery Piggyback (Asterophora lycoperdoides) is slightly smaller, but its main distinguishing feature is the pale brown dusting on the upper side of its cap. This powder is made up of asexual spores knows as chlamidospores, and is as is noted on the First Nature website, is an unusual feature of basidiomycetes fungi, which produce sexual basidiospores on their gills or in pores (in such examples as the bolete fungi) – the Powdery Piggyback also produces these basidiospores on their gills. 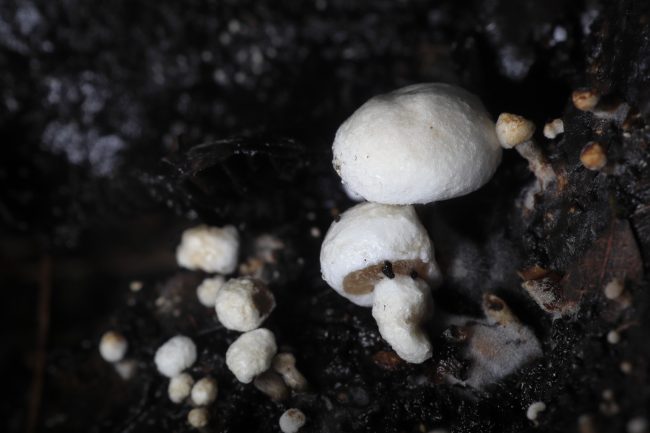 One thing that is worth mentioning is that despite the ‘parasitica’ part of the Latin binomial name of the Silk Piggyback, neither are parasitic in any true sense of the word. They are in no way detrimental to their russula hosts. They just have evolved to grow on the long-lasting blackened remains of the various charred brittlegills (they can also be found on the decaying remnants of a number of milkcap species).

And so now is the good time to find these curious types. The russulas in general tend to begin fruiting early during the summer months. The Blackening Brittlegill begins appearing in late summer and autumn in both coniferous and deciduous forests, but many will have gone over now and can be seen lying on the ground among the fallen leaves, beech mast, pinecones and other forest litter forming a mushroomy substrate for these two Piggyback species, which you might barely even notice unless you are looking closely at the ground beneath your feet. 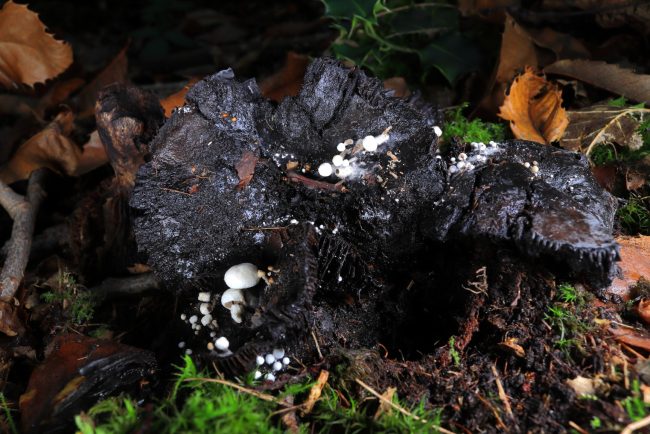 This is amazing. i am looking around for a late mushroom picking/spotting walk.
All places seem to be booked up or just to far away from London.
Can you help?