Plants need to protect themselves from the vagaries of the environment - they need to prevent or resist the entry of disease pathogens (bacteria, fungi and viruses) and also restrict the loss of water from their tissues.   The flow of water through a plant (the transpiration stream) is important in the supply of minerals to the growing regions and the ’control' of leaf temperature (as water evaporates it uses heat energy -  exerting a cooling effect).

However, uncontrolled water loss would soon result in wilting and death, so the outer layer of plants - the epidermis, has a special layer, the cuticle.  The cuticle is made from waxes, which often form complex and intricate patterns (when viewed with an electron microscope).  Because of the waxes, the cuticle is water repellant. 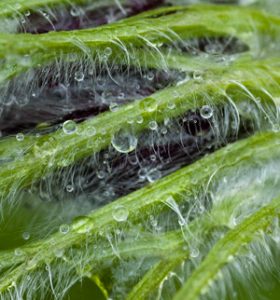 Water that falls on its surface tends to form droplets on contact (see image below) and these then fall or run away.  The cuticle also limits water loss from the cells of the leaves (or stem) as water finds it hard to permeate the waxy components.

Below the outer waxy layer of the cuticle is another layer - this is made of wax mixed with cutin.  Cutin is a polymer, that is, it is made up of repeating units - of long chain fatty acids. Then there is the layer that is closest to the cells of the epidermis; this too contains cutin and wax but ‘mixed in’ with cell wall components - cellulose, pectin, hemi-celluloses etc.  The thickness / depth of these layers varies from species to species, and indeed from plant to plant.  Plants endemic to dry regions typically have thicker cuticles than those growing in damp places.

The cuticle can vary in thickness from leaf to leaf on the same plant.  For example, leaves high up in the canopy are exposed to strong light intensities so may have a double palisade layer (of chlorophyll rich cells), however, they will also have a well developed cuticle to help resist the drying effect of the sun’s rays. 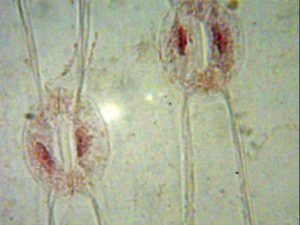 Restricting water loss may be further helped by the presence of minute hairs.  These hairs trap humid air next to the leaf - creating an ‘unstirred layer’, which slows the loss of water from the stomates or the cuticle.  These hairs or trichomes can take different forms, varying from uni-cellular to multi-cellular.  They can be simple or branched, some are glandular (releasing volatile oils as in the mint family).  A number of terms are used to describe the various states of ‘hairiness’ of leaves, e.g. 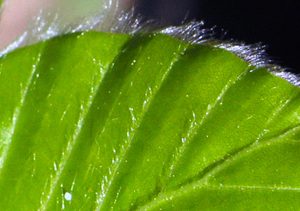 Apart from restricting water loss, hairs may interfere with the feeding of small herbivores (various insects, caterpillars etc).  Some plants such as the nettle (Urtica dioica) have protective stinging hairs; These hairs are, in fact, hollow tubes (to see them in detail visit http://www.arkive.org/common-nettle/urtica-dioica/video-10a.html?offset=0px).  Each tube (or trichome) and its swollen base is filled with a cocktail of chemicals, which includes histamine, serotonin, and formic acid. 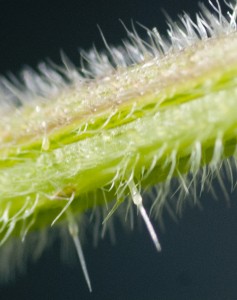 The tip of the tube / hair is easily broken, leaving a sharp point that can penetrate the skin delivering the chemical cocktail which gives the characteristic rash of a nettle sting. In some plants, the leaves have a dense layers of hairs which create a ‘whitish’ reflective layer, protecting underlying tissues from the direct heat of the sun’s rays.  The piliferous  (hair bearing) layer of the roots is, of course, associated with the uptake of water.

Prickles and thorns are also outgrowths of the epidermis, but they involves tissues or structures other than the epidermis.

Note : there is an interesting article in Science Daily about

the evolution of the cuticle in Mosses - 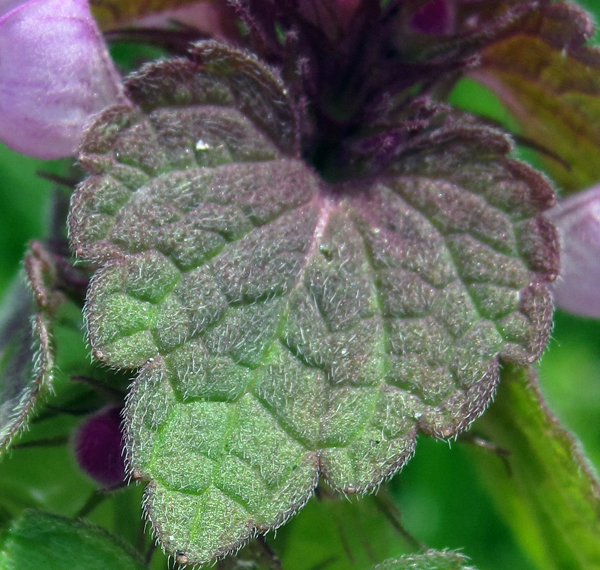