Some seeds when they are dispersed come with a small layer or ‘wing’, made of a complex carbohydrate (mixed with some protein).  When wetted, this material swells to form a sticky, gooey mess - this is mucilage.   For a seed to be dispersed with a sticky mass of goo may seem strange, but biology is rarely wasteful or without purpose.

One such mucilaginous seed is “CHIA”.  Chia seeds are classified as a ‘novel food’ in Europe [since 1997], though they have formed part of the diet for people in parts of the Central Americas for centuries.  The seeds are from the fruits of Salvia hispanica - an annual herb that belongs to the Mint Family (Lamiaceae).  The seeds are small (about 1 mm) and roughly oval, they are rich in a number of nutrients - such as omega-3-fatty acids, and minerals like calcium and magnesium.

When the seeds are soaked in water, they can absorb up to twelve times their own weight of water and the mucilaginous coat swells - forming a gelatinous, sticky coating around the seed.  The hydrated seeds are now not dis-similar in appearance to frog spawn.

The mucilage around seeds can serve a number of functions:-

Chia seeds are now quite popular in smoothies, breakfast cereals, bread, granola bars and as a topping to various foods.  The gel from ground-up seeds can be used as a substitute for eggs in cakes and may be used in vegan recipes. 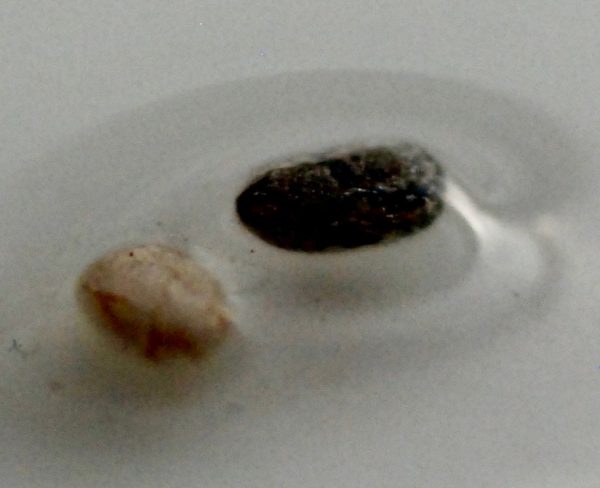