Squirrelpox (SQPV) – how it spreads.

It is well known that the native populations of the red squirrel have been depleted in significant numbers over the last century  This is in part due to habitat loss, and competition with and displacement by the grey squirrel but also the insidious squirrel pox virus has been at work. Research workers at the Queen’s University, Belfast have been investigating how this virus passes from animal to animal.

Though grey squirrels carry the virus, they seem to be relatively immune to its effects.  However, they pass out the virus in their urine.   The virus can persist in the environment for some time, especially if the conditions are dry and warm.   Uninfected squirrels are likely to come in contact with the virus (in dried urine) in Spring and Summer, when they are active and moving around in their territories. 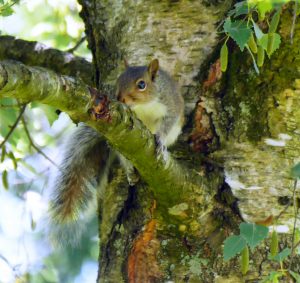 The level of virus in the blood stream of red squirrels can be some 50,000 times higher than that observed in an infected grey squirrel.   The red squirrels become very sick and suffer from diarrhoea - which carries a high load of virus particles.  So this too might facilitate the transmission of the virus within the red squirrel population.

However, there is yet another possibility for the transmission of the virus.  Squirrels have a number of ectoparasites - fleas, lice and ticks.   These feed upon the blood of the animal, and can carry the virus from an infected animal to an uninfected one.

Thus, the virus can pass from

This work again stresses the importance of limiting contact between the grey and red squirrels - particularly protecting the isolated population of red squirrels so that the virus (SQPV) does not enter those populations as the grey squirrel extends its range.

Further information on this work can be found here http://journals.plos.org/plosone/article?id=10.1371/journal.pone.0089521

Norman, I’m surprised to hear this, and not entirely convinced. Red squirrels have lived for thousands of years alongside pine martens and have evolved various ways of dealing with the threat. It is the grey squirrels who need to worry about pine martens. An excellent article by George Monbiot highlights the (very positive) impact that the growth in pine marten populations has had on red squirrel numbers in some areas. https://www.theguardian.com/environment/2015/jan/30/how-to-eradicate-grey-squirrels-without-firing-a-shot-pine-martens Well worth a read.

The biggest problem for the Red Squirrels in this area is the burgeoning population of Pine Martins.
We don’t see Red Squirrels here anymore since the PM’s have expanded into all the local areas.

About 15 years ago BBC’s Countryfile programme visited our Woodland Centre in Gateshead as we were one of the few remaining urban areas in the country still with Red Squirrels Shortly afterwards, while taking kids on a fungal foray, I heard something falling through the undergrowth and a lad found a dead/dying Red Squirrel;I bagged it and took it back to the Centre, where I found the large brown envelope was full of fleas…..! We no longer have Red Squirrels in Gateshead, as far as I’m aware and in the 3 places they still are on the outskirts of Newcastle, we are fighting to save from Developers.