Climate change means that we are likely to experience more extreme weather events from intense and prolonged rainfall to severe drought and heat.  The plants and trees of woodlands may experience periods of flooding, during which their roots may be deprived of oxygen (as the soil is waterlogged) and consequently - die.  Similarly trees and other plants may be subject to drought - resulting in the stunting of growth or even death.  It had been thought that most trees had roots that penetrated deep into the soil (in search of water and minerals) but the aftermath of the Great Storm of 1987 revealed that this was not the case for many types of tree.  The root systems of many trees are, in fact, relatively shallow - the root plate may only reach down some five to six feet.

After a period of drought, it is not unusual to find that a number of trees may die, but it is often difficult to know why one tree should succumb whilst its immediate neighbour survives.  There are explanations in terms of variations in the soil and the underlying geology - a particular tree might experience greater water stress.  Certainly it is the case that drought "weakens" trees so that they may be more susceptible to attack by insects e.g. bark beetles or pathogens / disease. 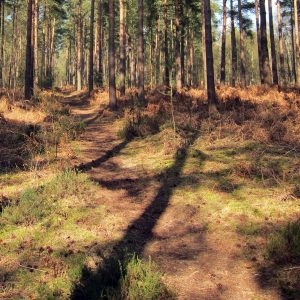 Recent research has shown that trees vary considerably in their physiology to drought tolerance. Drought tolerance / resistance of Pine (Pinus sylvestris) was investigated.  Young pine trees were grown in a greenhouse and then subject to extreme drought conditions - no watering!  The plants were monitored prior to the drought, during the drought period and analysed after their demise.  Some died after 29 days, whereas others survived for up to 147 days. It was found that

•.   those with a higher photosynthetic rate during the drought coped better (even though they lost more water through their stomates)

•.  those with a greater "below ground mass/above ground mass" ratio last longer - presumably as the greater amount of root material offered greater access to the limited water.

Other work with Pines has revealed that drought affects the release of volatile organic compounds (VOC's) - isoprenoids.  VOC's can react with other molecules in the atmosphere - see previous woodlands blog.   Lüpke M, et al have shown that different populations of Pine have different VOC fingerprints, and that their release is affected by drought stress and subsequent recovery.    The study revealed that not only did photosynthetic and transpiration rates fall in times of water stress, but so did the emission / release of the VOC's.