Well, not ours exactly …. but during the spring and summer it’s rare for us not to see and hear the buzzards. In Woodcock Wood they fly above our backdrop of Corsican pine and make forays across the chestnut coppice, occasionally perching in the tall oaks. With open fields behind the pines, this makes the perfect habitat for this beautiful bird.

We are lucky that Woodcock Wood is a small but central part of their territory. We see them most often in spring when the pair renew their vows in noisy and beautifully aerobatic courtship displays. It’s usually their calls that attract our attention, and then it is a privilege to watch their mastery of flight in these displays. They are at their most spectacular when they soar (spiral) upwards on a thermal. The smaller male usually climbs first, with the female following under him, sometimes spiralling in the opposite direction. It is extraordinary how fast they climb … and if we are lucky, they might then come close together, wing tips touching, and then with wings back the male stoops at breathtaking speed. It’s beautiful to watch, and it’s why we are so addicted to watching raptors.

Throughout the summer while the young are being reared, the adult pair continue to display. They frequently soar, or follow the boundaries of their territory, and make their presence known with that evocative call. These flights act as warning displays for potential intruders. Studies have shown that the flight patterns of the courtship and territorial displays form a complex language and act as social signals for mates, young juveniles, and potential intruders.

Buzzards actually spend most of their time perched, either hunting from low perches, or on the bare branches of high trees just watching. During late summer and winter we see less of them, but the breeding pair maintain their territory throughout the year.

In 2017 the pair raised one chick, and we often saw the three together, or the young bird perched high in one of the oaks calling for food. Sadly this year, we saw no evidence of young. 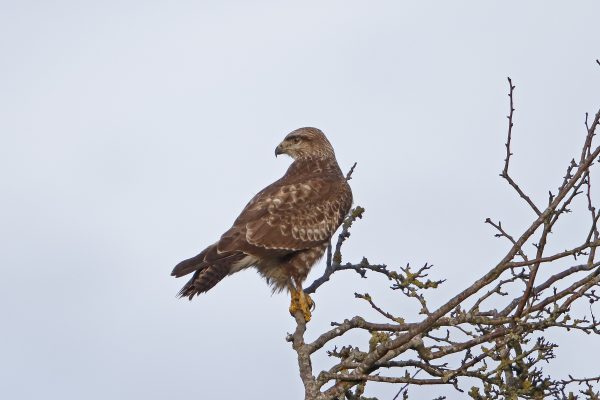 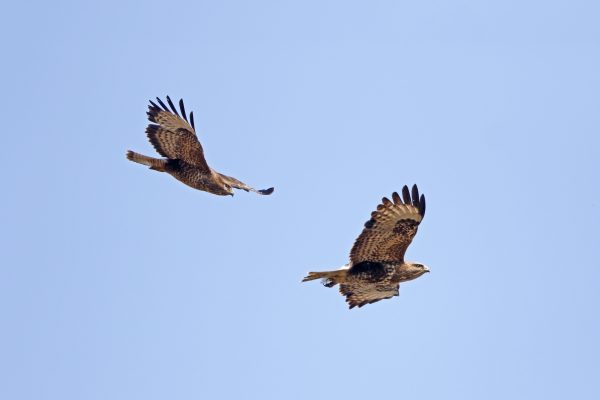 Along with sparrow hawks, buzzards are the most common European raptor. In UK there is little to confuse them with – perhaps in some parts, a rare glimpse of the distant silhouette of a golden eagle, or in wooded areas an elusive goshawk. But most times the only other raptor of this size we are likely to see is the red kite, and the two are easily distinguished by shape and markings.

However in Spain and Portugal, where we spend a lot of time watching raptors, identification can be more challenging. The common buzzard’s plumage is very variable, and their silhouette against a cloudy sky can easily be confused with booted eagles, honey buzzards and others … but that is another story. In Woodcock Wood, when we hear their 'ki ki' call and see their profile we know immediately that we are watching buzzards, and what a pleasure that is!

Thanks to John Hawkins for permission to use these fine photos of buzzards  - see also https://www.zpc-naturefolio.org.uk/john-hawkins.html.    He has requested that they are not to be reproduced beyond this blog without his permission.