Recent research at the University of Bristol has shown that bumblebees are sensitive to the humidity of the air that surrounds flowers.  Being able to detect this sensory information affects the bees’ behaviour. Just as bees learn to recognise patterns, colour and the scent of particular flowers so they can distinguish humidity patterns.   How effective these humidity patterns are will depend on the immediate micro-environment of a flower - which may be affected by climate change.   Full details of this work can be accessed here : 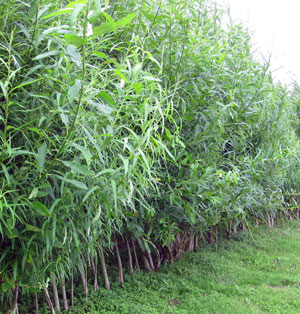 Experimenting with a willow plantation (in Quebec), scientists have found that waste water can be ‘filtered’ by the roots of willow trees.  Seemingly willow trees are tolerant of contamination and their roots can deal with the high nitrogen content of sewage.  Not only this but the waste water materials lead to a three fold increase in willow biomass.  This biomass can eventually be harvested as a biofuel (rich in lignin and cellulose).  It was also found that the trees produced enhanced quantities of extractable ‘green chemicals’ - anti-oxidants, anti-inflammatories and anti-microbial (some of which await characterisation).  Details here : https://phys.org/news/2021-06-bio-refinery-chemistry-willow-trees-canada.html

A threat to the garden ?

The RHS (Royal Horticultural Society) has warned gardeners to be on the alert for the brown marmorated stink bug.  During summer months, these insects feed on a variety of fruits and vegetables e.g. apples, pears, peaches, tomatoes & sweetcorn. They pierce the surface and sucking out tjuice. Consequently, the produce is distorted and they can leave behind rotting spots / blemishes which can make the produce unsellable or inedible.  It has been seen in a few places so far Essex, Surrey and the NHM’s garden.  It is an Asian species and it could easily become established in the South East.  It looks like many other shield bugs, but it is dark brown with a series of pale brown /cream dots across its body.    Details of its biology and life cycle here : https://planthealthportal.defra.gov.uk/assets/factsheets/halyomorpha-halys-defra-pest-factsheet-v3.pdf.   Further info here : https://www.nhm.ac.uk/discover/news/2021/march/monitoring-stink-bugs-to-anticipate-the-future.html?

The Western Coast of the States is noted for forested mountain ranges.  The forests cover some 360 million acres across rugged terrain.The trees range from large, fast-growing species along the Pacific coast to high-altitude species where tree size is smaller and growth much slower,.  Most of these western forests are coniferous, but there are also some hardwood forests.  In these forest and mountains, there is a point / altitude  where the forests were ‘too wet’ to burn, partly due to the lingering presence of snow.  Too give this point its technical name, it is called the ‘high elevation flammability barrier’.  However, due to climate changes increasing temperatures, changing rainfall / precipitation this ‘too wet to burn’ point has moved some 250 metres higher !  So, the amount of forest that has burnt or is at risk of burning has increased substantially.  The warmer temperatures have also ‘favoured’ bark beetle infestations. 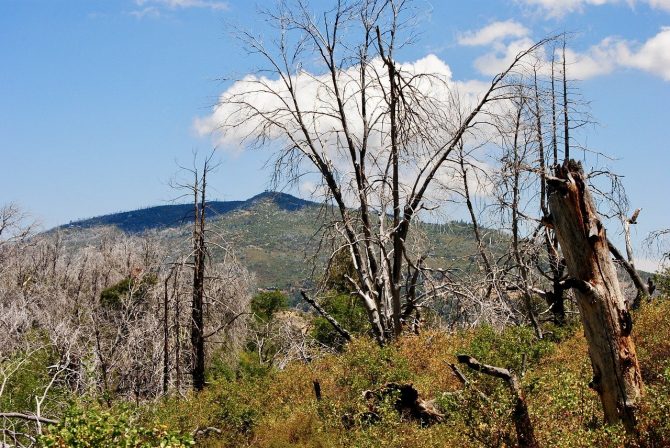 Thanks for the above image to Theresa McGee from Pixabay