The effect of pesticides on bees and bumble bees is now well documented.  However, the combined effect of different pesticides is less well known.  If pesticide A is known to kill 10% of the bees in an area that has been treated, and pesticide B kills another 10% then it might be reasonable to assume that 20% of the bees would be killed - IF the effects are additive.  However, evidence is beginning to indicate that the effects of the pesticides is more than the sum of the parts - the pesticides work together / synergistically.

Pesticide formulations that are sold to farmers are often ready mixed ‘cocktails’ so exposure to more than one pesticide is often the norm,  so it is important that these co-operative effects are understood and known.

Honey bees have been affected by not only pesticides but also varroa.  Varroa is a mite, which lives and feeds on honeybees and their larvae.  Fortunately, bees have complex hygienic behaviours, for example, removing dead larvae or pupae.   Research indicates that honey bees are modifying this behaviour to deal with varroa mites. 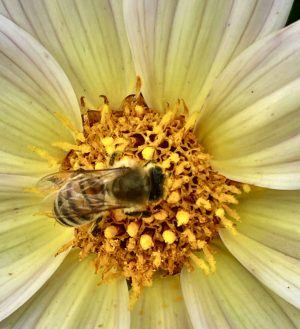 Researchers at the University of Freiburg have recently published work establishing the importance of semi-natural habitat regions next to orchards and other agricultural landscapes for pollinators.  Such areas (ditches, banks, overgrown fences etc) help ensure that flowers (and therefore nectar and pollen) are available over a significant period of time.  This is important for pollinators such as hover flies, solitary bees, bumblebees etc. as nectar / pollen provided by crops is only available for a short and limited period.  Such areas are also important for overwintering, nesting sites, providing food for larval stages etc).  Their work focused on orchards near Lake Constance in Southern Germany.

There are many sites around the world where the soil is contaminated with metals (such as arsenic) as a result of past mining / industrial activities.  Such arsenic contaminated soil might be ‘revived’ by using the natural mechanisms that some plants have evolved to deal with certain contaminants.

The white lupin (Lupinus alba) is an arsenic-tolerant plant that might be a candidate for phytoremediation of soil.  The tolerance of the white lupin to arsenic is thought to be due to the release of chemicals by the roots into the soil.  Staff at the University de Montréal placed nylon pouches close to the roots to capture the molecule released.  The chemicals were then analysed to see which could bind to the arsenic (phytochelatins).  Phytochelatins are known to be used within plants to deal with metals but here they seem to be used externally.  Quite how they work is yet to be determined.