Unusual or exotic trees – the holly?

Holly is not a ’typical’ tree in a number of ways.  For example, it is evergreen but not a conifer.  A holly tree is either male or female. Also, holly leaves have spines and a thick, protective and waxy cuticle.

The word ‘Holly” derives from the Old English “holen” or “holegn”.  Holly was also referred to as ‘holm’, ‘holme’, or ‘hollin’. These names for holly can be useful when examining old maps and ancient texts for references to the historical distribution of holly across the U.K.  It is certainly the case that in the past, the distribution of holly was more widespread; this was true for Needwood Forest in Staffordshire.  Needwood was a significant and ancient midlands forest but after the Enclosure Act of 1803, large numbers of trees were felled.  In his ‘Plant Book’, Professor David Mabberley notes that some 150,000 holly trees were taken from Needwood (about this time or shortly thereafter) to provide bobbins for the cotton mills of Lancashire.  (Bagot’s Wood is said to be the largest existing piece of this ancient woodland).

One of the more unusual woods with Holly is to be found at the northern end of the Stiperstones in Shropshire.  Some of the holly trees found here are pollarded and thought to be over two hundred years old. Indeed, taking into account their circumference they could be 300 years old. (‘The Hollies, Stiperstones’ Shropshire Conservation Trust Bulletin (11), Peterken, 1967).  Some of these trees have other trees growing out of their crowns - such as Rowan  (where the rowan has rooted in the rotting heart wood of the holly). 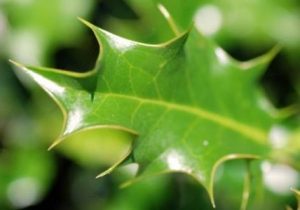 Holly was more common in the past as it could serve as a source of fodder.  Holly leaves are palatable to livestock, despite their spines.  It is the only evergreen tree (found in deciduous forest or woodland) that does not contain chemicals that are toxic to sheep or cattle.  Yew, whilst evergreen is very toxic. From the C12th through to the C18th, it was common to provide holly for livestock during the winter months, when other foodstuff such as hay or grains were in short supply.  Without the provision of holly, livestock might have to be slaughtered leading to problems in subsequent years.  The practice of using holly as fodder was more common in areas like Cumbria, the Welsh Borders and the Pennines*. The berries of holly are attractive to birds, especially redwings and fieldfares. 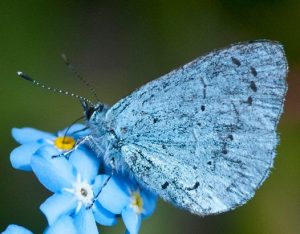 The leaves of holly contain a bitter tasting alkaloid - ilicin. It is possible that this deters many leaf eating insects. Indeed compared to many trees the holly is not subject to sustained insect attack (compared to Oak) though its leaves can harbour the holly leaf miner.  Another insect associated with the tree is a rather beautiful butterfly - the holly blue (Celastrina argiolus).  Like its host, the holly blue is a rather unusual - in that the butterfly changes its host plant between spring and summer.  In spring, adult ‘Blues’ lay their eggs in the flower heads of Holly.  The caterpillars that emerge from these eggs feed on the flower buds and young green berries, pupate and produce a new generation.  This second generation of blues (that emerge in August) lay their eggs on Ivy (Hedera).   They produce caterpillars which turn into pupae, these overwinter and produce the (first generation) adults in the next Spring.  The Holly Blue is found widely over Southern England and Wales, but has a more limited northern distribution. 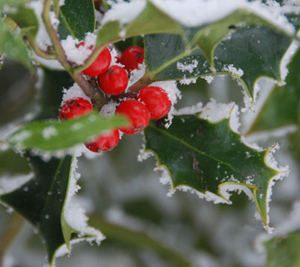 In the past, Holly was also used extensively for hedging as it was valued as being impenetrable and durable, the downside of using holly (as compared to hawthorn) was its relatively slow growth.  The wood of Holly has been used in joinery, cabinet making, engineering, the making of mathematical instruments, wood engraving and veneering. Holly has been used to decorate homes and holy places for centuries.   An early reference to the use of Holly at Christmas time can be found in Stowe's 'Survey of London' (1598)  to quote 'every man's house, ….. the corners of streets were decorated with holme' (holme = holly).  The foliage tends to last quite well in garlands, wreaths and other displays. 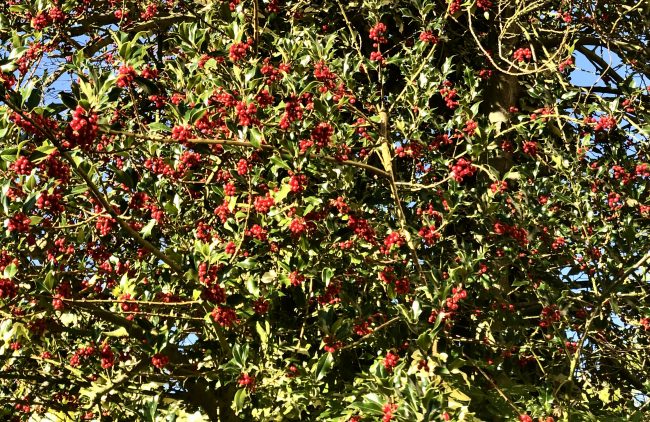 According to folklore, if holly trees are festooned with berries - this is an indication of a 'hard winter' to come. My neighbour's tree has a lot of berries !