At a recent Glastonbury festival over 5,500 tents were abandoned with over 6,500 sleeping bags and 400 gazebos just left behind.  This is despite modern tents being lightweight.  It seems that tents are now cheap enough for many people to treat them as disposable items, but at least in an organised event there are people willing to clean up after the casual camper and many of the Glastonbury tents were recycled (technically, they were reused).

Lightness and cheapness in tents are recent phenomena brought about by the efforts of manufacturers and inventors such as Richard Buckminster Fuller.  Fuller or "Bucky", as his friends called him, was by any measure both eccentric and a visionary.   Although he died in 1983, you can still see him speaking about his ideas on youtube - one of his recurring thoughts was that structures should get their strength through tension rather than weight.  He opined that "a good index to the performance of any building frame is the structural weight required to shelter a square foot of floor from the weather.  In conventional designs the figure is often 50 lbs. I have discovered how to do the job at around 0.78 lbs."  Bucky viewed his life as an experiment in discovering what an individual, starting with nothing, could do to benefit all humanity.  Despite being expelled from Harvard (twice!) he received at least 48 honorary doctorates from universities around the world.  But it is for his work on domes and tents that campers will remember him.  He was the father of the geodesic dome and his revolutionary domed tents - used initially by the US marines - have come to dominate modern tent design. 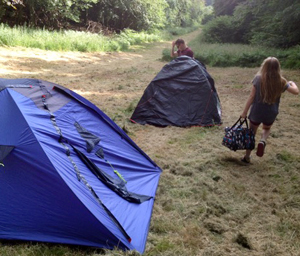 Those of us who camped in the 1970s and 1980s will remember the huge effort of lifting heavy tents off the car or out of the boot and struggling with dozens of metal poles to try to  solve a 3-dimensional jigsaw puzzle.  These frame tents, though heavy, do provide good living spaces where you can actually stand up and they make the camping experience more comfortable (once the tent is up).  They are ideal for static holidays but very hard work for touring, and back in the 1970s and 1980s a strong wind could easily uproot these frame tents and turn them into giant, brightly coloured tumbleweed.

Now, if you search for "tents" under Google images, it becomes clear just how few frame tents are in active use - the tension structures that Buckminster Fuller championed have taken over.  You will, however, see a few marquee-type tents for camping situations where vehicles are used for the carrying and where the tents are to remain in fields or woodlands for some time.  So the expression of "sleeping under canvas" may occasionally be justified but for the most part it is an anachronism a bit like the phrase "leaving the phone off the hook" when hooks haven't been used for holding the telephone receiver for almost 100 years.  Most campers now sleep under nylon. 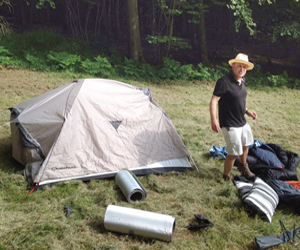 At locations where the tent won't need to be moved, Tipis (aka also tepees or teepees) are increasingly common and a contrast both to the 20th century dome structures and frame tents - in that they were developed over many generations by the American Indians. Tipis are built around three central poles which are pitched steeper on the windward side and they open towards the sunrise.

Although modern tents are far lighter than tipis, none of the recent innovations has improved on the tipi method for controlling a fire inside a tent - the smoke hole is managed by two flaps or ears, each attached to an external pole that can be used to manipulate the air flow over the vent.  While the tipi is a refined piece of wilderness technology created by generations of American Indians, it does not work well for modern campers on the move - for example the long poles make it impossible to carry it on a roofrack on today's roads.

Camping "under canvas" at fixed locations offers some freedom, but the ultimate freedom is wild camping and in the wild no one will pick up a discarded tent for you so you need both a tent that is light to carry as well as an attitude of "leave no trace".  In Scotland, wild camping is legal but it is mainly forbidden in England so southerners have to rely on friendly landowners, friends who have suitable land, or possibly  they could just buy a wood of their own.

We all love a bargain, and I’m as guilty as the next person of buying something cheaply, but perhaps if things cost more we would value them more.
And, yes, the things some people do are disgusting, and I think not clearing up after oneself is just that. What a pity those of us who love the environment can’t influence these people more; we can but try.

Without going into too much graphic detail, a lot of these “cheap” tents are used for other purposes rather than sleeping in. Just imagine a clear up volunteer unzipping that little package……that’s why they wear gloves!

What is the matter with people?? It would be nice to think that the tents had gone to be used by refugees, and people who really need them.

And yes, good on those who cleared up too!

Just typical of SOME of our youth today. Leave your rubbish i.e. tents and sleeping bags behind and let someone else pick it up and dispose or it. Throw away society or what.
.

What can I say! 5,500 tents left behind? Well at least they are being reused( I wonder where?) anyway good on the people who help clear up the detritus left behind by these irresponsible people. Keep up your goodwill spirit!!!