I purchased a small woodland in West Lothian in July 2020.  It is ex-forestry commission woodland of about 4.75 acres.  It had some open areas, gaps in its planting as a result of two gas-pipe easements through it. On one edge of the wood, there is a small river, the opposite boundary is a road. The parcel of woodland is one of several side-by-side blocks with common planting, mainly of larch, but with a fair number of hazel, oak, cherry, sycamore and a few stragglers of other species.

I was attracted to this woodland because it had a mixture of well established trees, but also a good opportunity to plant out the unwooded areas (that might be a third of the area). Researching gas wayleaves, I found that the distance allowable for plantings from the actual pipeline varies with the species and size intended for the trees. There are simple restrictions on heavy plant digging along the route of the buried pipeline for obvious reasons. 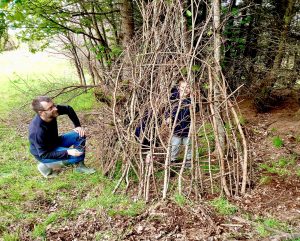 My main objectives in buying a woodland were twofold

As an old saying goes – buy land, they’re not making any more of it!

Initially I just visited the spot many times and got used to finding out what lives there, who goes there and what happens. Dog walkers use the area a lot, and trampled grass attest to their frequency. I’ve maintained their routes by trimming and mowing. but I also came across families of deer, and many different bird species. Despite there being over a hundred hazel trees, there seemed no evidence of squirrels; as yet I’ve never seen one.

But what of these wayleaves? Wild meadowland is all very well, but these were more wild rushes land. Rushes abounded and the unplanted areas were almost 100% rushes. I researched a lot about these, and was keen to find a method of eradication that didn’t involve chemicals. I found it in an old fashioned scythe. Purchasing one and learning how to sharpen it, and use it to best effect, I found that after an initial foray with a sickle bar mower, the scythe was the best tool for keeping the rushes under control. Now after some eighteen months, I’ve probably got about a quarter of the rushes left and I am working to rid the wood of the rest. I don’t let them seed, nor get enough growth to keep going, consequently they’re dying.

Planting Christmas trees would allow planting closer to the pipes / wayleaves. Off to a nursery in East Lothian I went and loaded up with a thousand Norway and Serbian Spruce seedlings. I’ve since bought another two hundred, so in total planted about 1200. Over 1100 survived the drought of summer 2021. And still I’ve found more space, so intend planting several hundred more, but will vary the varieties. I have also planted some willows from cuttings along the river bank. 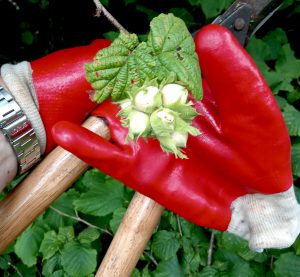 The hazels were an attraction. With more than hundred, perhaps even two hundred, it was obvious that they’d never been pruned, so I learned about that and set to work thinning them. This has led to making hazel walking sticks as a side hobby! I was looking forward to last autumn’s harvest, seeing the signs of the promised fruit early on and the developing nuts during the summer. Judging the right day to go and harvest them and expecting to fill a 200 litre drum,  off I went.   Imagine my surprise to find the ground all trampled and not a nut to be seen! This was the first sign of “squirrels”, ones that wear wellingtons!. I imagine someone has been harvesting them for years and how would they know that these now belonged to someone taking an interest in their land?

My grandchildren have loved going “to the forest”. And their grandfather likes the quiet, the flora, the fauna and the peace, even without nuts!

Thank you for the Blog [Crith Wood]. The link at the end — only gave me the first photo of the blog. Is the rest still available?