How many trees are there in the world?  Four hundred billion was the figure often quoted; that is, until this month when a report in Nature has come up with a figure slightly in excess of three trillion.   This approximates to 420 trees for each person on the plant.

How was this figures arrived at ?  Well, the team (an impressive array of scientists from Universities and research institutions all over the world) amassed data from national forest inventories, plus peer reviewed studies where forests and woodlands had been studied in detail; this information was then used to inform what was also being seen on satellite imagery. For the purposes of the study a tree was defined as "a plant with a woody stems larger than 10 cm at breast height". 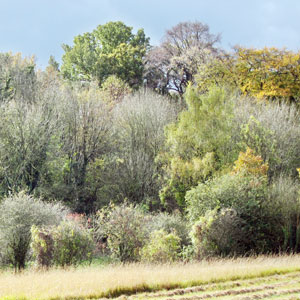 Sadly, trees are being removed, cut down faster than they are being replaced.   The report suggests a removal rate of (circa) 15 billion trees per year, and a replacement rate of 5 billion a year.   These figures  should "...give us cause for considering the role that deforestation is playing in changing ecosystem" to quote Dr H B Glick (one of the authors from Yale School of Forestry and Environmental Studies).   Tree removal and deforestation has been a feature of human activity for the last eleven thousand years (since the last Ice Age), perhaps accounting for the removal of some three trillion trees.  It is estimated that the global total of trees has fallen by 46% since the onset of 'human civilisation'.  At one point, most of Europe and Asia was covered in trees but much is now fields and grassland.

In order to calculate water release (from vegetation) additional information would be needed e.g. local temperatures through the year (directly affects rate of transpiration), leaf cover / leaf area throughout the seasons, wind speed (another major determinant of transpiration), humidity / precipitation etc. However, the information gained on the density of trees in different parts of the world does contribute to the understanding of the global hydrological cycle.
http://www.scientificamerican.com/article/how-many-trees-are-there-in-the-world-video/

One would also need a lot more data on a variety of factors to calculate carbon dioxide assimilation.

Can these figures be used to calculate the amount of water being released into the atmosphere or the amount of carbon dioxide not being absorbed by the trees? What other important indicators of climate change can be gleaned from this report?