Greenwash – are the public being bamboozled?

Greenwashing is when a company spends more effort on saying how environmentally friendly they are rather than actually reducing the environmental damage they do.  Examples could include the recent claims made by Easyjet that they are already carbon neutral or the target by BP to become carbon neutral by 2050.  The Easyjet claim smells a bit like like fake news but at least they have pledged to spend £25 million over the next year on offsetting their carbon emissions - it's hard to see how even that can compensate for their 331 planes flying around the world 24/7.  BP's claim is easier to make because it's only a target for the year 2050 - "it's easy to write a cheque if you know it won't be cashed for 30 years" and, in any case, it's rather unlikely that the current board will be in place in 30 years' time.  So, putting aside these particular claims, why do big companies engage in such extravagant claims, and are they really just greenwash?

Use of greenwash may not convince people that these carbon-belchers are really going to become carbon neutral, but it may be more about persuading people that they are genuinely trying - that they are better than other, even worse, carbon emitters.  As the old saying goes, to escape from a bear you don't need to be able to run faster than the bear - you just need to run faster than your companion.  Greenwashing is about persuading the public that you are the good guys and they can carry on buying from you - it's also about salving the conscience of the frequent flyers and drivers of gas-guzzling cars so they can feel less bad about themselves.  It's been said that when you tick the off-setting box as you book a flight you are really buying an indulgence like people did in the middle ages as a way of washing away their sins.

So burnishing green credentials, even unbelievable ones, keeps up demand but it's also intended to draw people towards your brand.  Easyjet don't want people to ask the question of whether they should be flying but instead to ask themselves the question of which airline they should be flying with.  And their proposal to spend £25 million on tree planting is certainly appealing to woodland lovers and those of us who want to see more trees for other reasons.  But if the public discussion moves on will they spend £25 million on planting trees next year or will they go back to a diet of unfunded claims of environmental virtue?

Some of the big oil companies have moved from rhetoric to action, such as BP's purchase of a 50% stake in one of the largest Solar energy companies, Lightsource, now renamed Lightsource BP.  But of course the output of Lightsource's many solar farms is really tiny compared to the oil production of BP and that's not changing very fast.  So this is a sort of greenwash that goes beyond propaganda and into a real industrial purchase but critics say the main purpose is to give the oil major bragging rights.  Time will tell, but is this a bear hug by BP a bit like when the motor companies bought up the railways in Los Angeles in order to close them, or is it a foot in the door so that BP can become a genuinely large and growing producer of green energy?  One suspects that being a profit driven company the answer will lie in where they can best make money - so a hydrocarbon tax linked to a solar subsidy could change this from mostly greenwash to much more green energy.

Shouting about your good green intentions has another important purpose for big corporates - to reduce the chance of being regulated and to persuade policymakers and the public that they don't need to worry.  When the government fully realised that smoking was killing people they banned cigarette advertising on telly in 1965, but it took until 2005 for them to ban cigarette advertising through sponsorship.  Surely advertising for flying should now be banned, but corporate greenwash may help persuade the government - especially a red-blooded aviation-loving one - that the airlines are doing all they can.  For a long time organisations like Heathrow Airport have straddled a policy of encouraging climate skeptics and avoiding talking about the subject.  They mostly left environmental questions over flying as the "elephant in the room" - unspoken, but looming over everything.  As this picture shows they have now decided to talk about it but is this more greenwash? - is it contradictory to claim to care about emissions and at the same time build another runway? 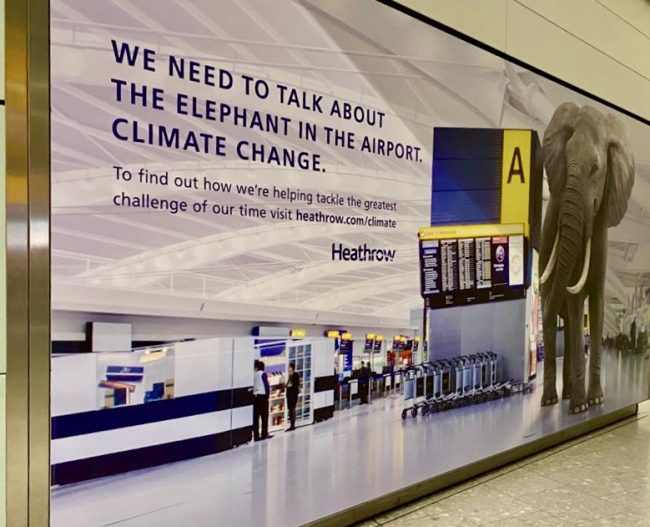