Is Amazon’s packaging gobbling up our forests?

Here at woodlands.co.uk, we’re not just interested in how our woodlands are protected and cared for. We also like to know how trees are being used for things like packaging - it occurred to us as yet another order from Amazon arrived with ample brown paper and plenty of space in the box, that the demand on trees from a company the size of Amazon would be very high indeed.  So we went to Amazon to ask some questions and we learned a lot more whilst visiting one of Amazon's 200 giant warehouses.  The one we visited on an industrial estate in Peterborough is big enough to cover 8 football pitches with a million square feet of space. Amazon has 18 of these huge sheds in the UK and this one carries the official name of EUK5, because it was the fifth centre that Amazon opened in the UK.  One of Jeff Bezos' associates invited me on the tour (all his 650,000 staff are called "associates") which reminded me why I simultaneously love and hate Amazon - I love its extremely wide choice of cheap stuff delivered efficiently and very fast but wasn't comfortable with what I'd read about how Amazon treats its workers and how the business has hollowed out our high streets.  But I'm also worried about the amount of cardboard they use - it's said to be clogging up our recycling systems and using more and more of our timber resource. 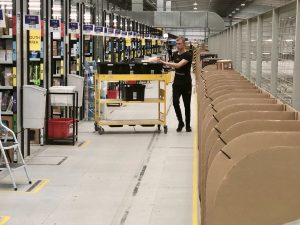 Martin was our guide and he knows the Peterborough warehouse backwards having been working here for 7 years.  He likes the company but he does regret the loss of the old ways of shopping - "sad, but one just has to move with the times".  He translated the warehouse lingo for us - the yellow trolleys that the pickers use are called "stow carts", the black plastic boxes they put stuff in are called "totes" and ICQA means Inventory Control and Quality Assurance.  We absorbed this information but limited in how we recorded it - photos and audio recordings are forbidden and even though there were only 10 of us on the tour there were two extra guides to make sure we didn't break the rules and take sneaky snaps of the conveyor belts or packaging machinery.  Despite this fulfilment centre seeming modern it's far from state-of-the-art for Amazon - all their new centres are built for robots whereas ours was, in effect, using people as robots.  From what we saw, most of the 1,200 people 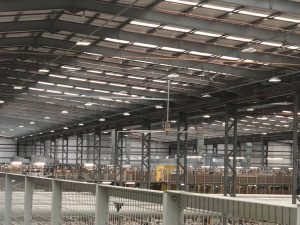 working here are Eastern European doing 10.5 hour shifts and going through a security control as they check in and out of the warehouse.   As one of the the older Amazon fulfilment centres,  this is used for hazardous materials.  Other older Amazon warehouses are used for oversized items and for slow-moving inventory - none of which are ideal for robots.

When I asked Martin about the recent protests over working conditions that occurred on Prime Day (actually it runs over 2 days) in Peterborough and at other Amazon UK fulfilment centres he said he didn't know anything about them and then said, rather surprisingly, that such protests were a good thing as they keep Amazon on its toes.  He did concede that most of the workers are agency contractors and that the wage quoted of £9.50 / hour applies only to Amazon employees and he told us that staff are not paid for all the breaks they take.  As we went round the warehouse he pointed out the personnel desk where workers can raise issues 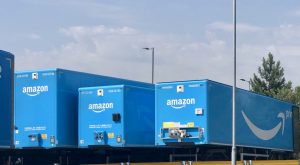 about their terms of engagement and he stressed that health and safety is a big priority for Amazon - there's plenty of evidence to support this and the warehouse certainly feels safe and well lit and there are lots of vending machines with Personal Protection Equipment (PPE) - it's free but worker's must use their ID cards to take out gloves and tape cutters.

People sometimes complain that Amazon doesn't pay much tax and that it shifts profits to countries with lower tax rates, but actually the company does pay significant business rates.  According to the government's Valuation Office 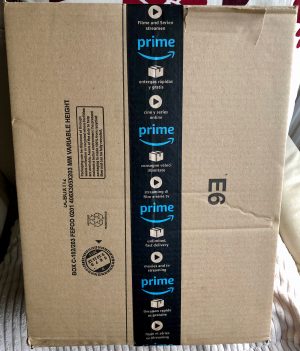 the annual rental value of this Peterborough warehouse is £2.46 million and so the rates paid on this particular fulfilment centre must be must be around £1.2 million each year, but perhaps that's modest in the context of the vast turnover Amazon puts through this Peterborough warehouse - and the managers make the premises work hard, operating 21 hours every day and using the 3 extra hours for repairs.

Do these taxes recognise the strain that all this cardboard puts on local authorities' waste recycling capabilities? Cardboard is a dominant feature of Amazon's enterprise, being used for many of the storage bays but also as the main packaging material for customer parcels.  With about a dozen bays for lorries which take the outgoing packages and with every item wrapped in cardboard and brown paper padding, the company is getting through enormous quantities of cardboard.  Amazon is now mammoth - over the last 10 years its turnover has grown about 10-fold and it now has about 50% of the retail e-commerce market so what they decide to do with cardboard and other packaging materials really matters.  At least cardboard uses lots of recycled paper products and is itself recyclable, so am I worrying too much?

Loads of invalid points in this.
Also the cardboard and paper used are all recycled