The loss of woodlands and forest across the world is but another example of human interference with natural ecosystems.    Tropical forests are raided for their exotic hardwoods or subject to wholesale clearing for ‘cash crops’ e.g. oil palms.  However, it would seem that this destruction is nothing new.

Professors Kaplan and Kolen have analysed soils for ash and suggested that the early (hunter-gatherer) settlers in Europe lit fires to clear the ‘wildwood’ so that grassland or more open woodland / steppe-like areas would develop.    These would attract more large wild animals (which could then be hunted for food) and also allow for the easier movement of people.

Fortunately, human settlement is not always associated with a deterioration of the environment.    Professor Trant has studied the coastal woodlands and forests of British Columbia. In areas where there was early human settlement, the trees are taller, broader and healthier than the surrounding forest.    The peoples living in these areas after the last Ice Age relied on offshore fishing to provide essentials for their diet - shellfish, in particular, were a significant item.    Having eaten the protein-rich contents, the shells were discarded to a “midden”  (some were many metres deep). 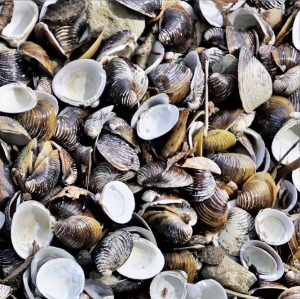 Over the centuries, the shells broke down - releasing calcium ions.    This calcium, plus the fires of these early peoples increased

Consequently, this harvesting of the molluscs of the inter-tidal region has resulted in an increase in forest productivity - the great western cedars  and other trees grew better. Here, for once, we have an example of the environment being ‘enhanced’ by human influences.

Thanks to Pixabay for 'shells image' (pasja1000) and forest fire jpg (Ylvers).