Swiss forestry is growing, especially in the alps

Forestry is a surprisingly important part of the Swiss economy and the sector employs 90,000 people, with 1.3 million hectares of Switzerland being given over to forestry.  To put this in a UK perspective, it is about the same amount of forestry land as Scotland and is a little more than England (which has 1.1 million hectares of forest).  The reason why Switzerland, smaller in size than England, has as much forestry land is that a much higher percentage of the countryside is given over to trees - Switzerland has 31% tree cover which is much more than England's 9% and is high even compared to Scotland which only has 17%.  In fact European countries are generally more forested than the UK - with Finland at a whopping 76% tree cover and even France is 27%, so Switzerland stands at just above the european average.  But some Swiss are concerned that forestry is covering too much of the country because it is growing -  since the mid 1990s the forest area has grown by about 3% because farmers are giving up more marginal land in the mountains and trees are taking over.  The way Swiss forestry laws work creates a one-way valve, as in the UK, so that while no permission is needed for new forest areas, once they are established they cannot be removed.  This expansion of the forest has been good for the deer and wild boar that have always been widespread in Swiss woodlands, but it has also contributed to an increase in rarer wild mammals such as wolves, lynxes and even bears. 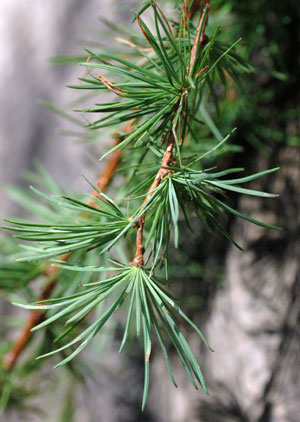 Within Switzerland, there are wide variations in tree cover with the Jura mountains and the Ticino area having around 50% forestry but forests occupy only about a quarter of the land at lower altitudes in the central and more heavily populated belt running eastwards from Geneva up through Lausanne, Berne and on up to Zurich.  Forestry, already well regulated, is now gaining more protection through the creation of new Nature Reserves - it is planned that by 2030 at least 10% of forested areas will be protected in this way.   These decisions do not affect private property rights as much as they would in the UK: whilst 60% of British woodland is privately owned, the figure for Switzerland is only about 28% and over half is owned by the state - mostly through the local communities.   Swiss forests are also more open to public use with strong traditions of mushroom gathering, firewood collection, walking in the woods and using forest trails for exercise ("outdoor gyms" which are subscription-free).

Swiss forests are dominated by three tree species: in the mountains the trees are mainly Norway Spruce (47%) and Silver Fir (15%) whilst at lower altitudes beech ("hetre") is the predominant species which makes up 18% of all Swiss woodland.  Larch is 5% and there is a wide mix of deciduous trees including many oak and ash.  Above the "tree-line", trees do not grow and the broadleaf tree-line is at a height of just over 4,000 feet whereas conifers can grow successfully at up to about 6,000 feet above sea level - this largely explains why 70% of Swiss forestry trees are coniferous. 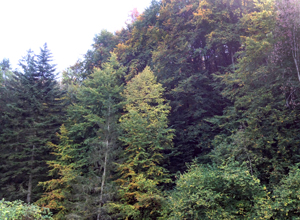 Commercial output of timber is impressive through good management as well as state subsidies for forestry, but output is also affected by the weather.  In the year 2000 there were two large storms, "Vivian" and "Lothar", with the result that annual output for that year doubled for sawlogs, veneer logs and firewood.  Many Swiss homes use firewood logs for domestic heating and they know it takes time to season, so they are opportunistic in acquiring it - whether as a result of storms or collecting fallen branches in woodlands.  But Swiss forestry is about much more than just producing timber - woodlands create windbreaks, they purify the air and they stabilise the soil.  In Switzerland, it is widely recognised that forests are also important in preventing rockfalls, absorbing water and preventing flooding (ecosystem services). 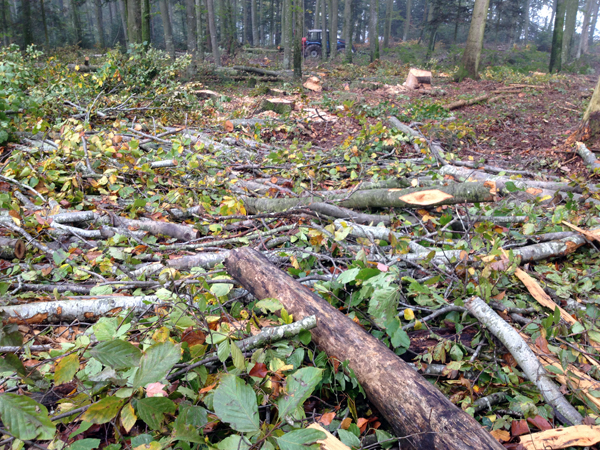 The photo of the beech thinning shows how brave you have to be to let light into the woodland floor and keep the wood healthy. Beech is a strong shade bearer and tickling a stand by removing a few suppressed trees isn’t going to make much difference. Be bold !