With the changing nature of our climate, so extreme events have become more frequent.  The last fifteen or so years has seen significant episodes of flooding.  Flooding used to be a relatively unusual event in the U.K.   In consequence,  efforts are now being directed at finding ways of mitigating the effects of extreme rainfall.

The risk of flooding is associated with changes in our climate (notably rainfall patterns) and the techniques of land management have changed with the mechanisation of agriculture,  the creation of simplified (larger) field systems, land drainage, increased stock densities etc.  The U.K. landscape / countryside has altered significantly over the last fifty years.  In consequence of these various changes, (e.g. increased stock densities which contributes to soil compaction) - water infiltration (penetration of water into the soil) has decreased, and water run-off has increased. 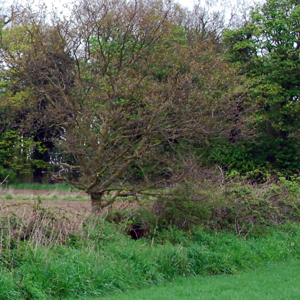 The loss of hedgerows and trees, and reduced surface vegetation has affected the interception of rainfall, and the loss of deeper root systems etc. means that effects of soil compaction can be more marked.   All of these changes can affect the rate at which water enters streams and river systems so that water is delivered faster to water courses from fields and agricultural land.

Though woodland coverage in the UK has been slowly increasing in recent decades, the percentage cover still remains one of the lowest in Europe.   The presence of woodland and hedgerow can significantly lower the peak flow of water - partly through evaporative loss / transpiration through canopy interception but also because of the increased water storage capacity of soil under trees, and the better water infiltration / retention by the soil.  The 'geometry' of tree planting can also influence the water penetration into the soil, clumps of trees seem to have a greater effect than single, regularly spaced trees.  Also, influential is the presence (or rather absence) of animals, such as sheep; they can cause soil compaction 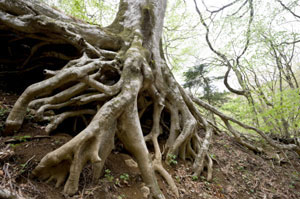 around the trees as they seek shelter and / or shade.  A (hybrid) grass species, Festulolium, that has an extensive root system (developed at Rothamsted and Aberystwyth University) has been found to be effective in reducing water run off (from agricultural grassland) by allowing more water to drain into the soil.  This grass also provides high quality forage and it is resilient to extremes of weather, making the  grass doubly useful to farmers

The restoration of hedgerows and the introduction of limited wooded areas to agricultural lands not only has benefits in terms of the mitigation of flooding (in a matter of a few years), it also helps promote biodiversity in agricultural systems.