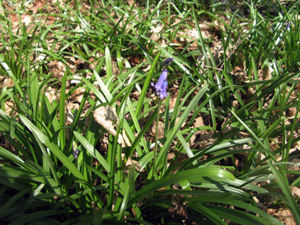 The leaves of the native bluebell (Hyacinthoides non-scripta) are narrow by comparison to the Spanish Bluebell, (Hyacinthoides hispanica) about half an inch or so wide.

Leaves of the Spanish bluebell are broader, often an inch or more wide and more ‘fleshy’.  The leaves of the spanish form are shown in the image below.  The height of the plants may be up to 40 / 45 cm. 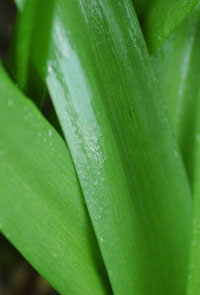 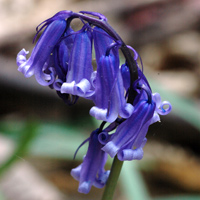 The flowers of the native bluebell lie at the top of the stem, and droop to one side (see photo left). The flowers are deep violet blue with parallel or straight sides; they have a narrow bell shape. The tips of the petals roll back somewhat, as though they ‘want’ to touch the tube of the flower. The anthers and the pollen are a pale cream colour. The petals and sepals of both flowers are similar, and all floral parts are arranged in 3’s. The flowers are also scented.

In the Spanish bluebells (also on the left), the stem is much more erect and the 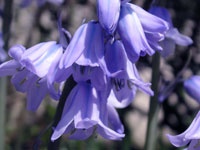 flowers are arranged around the stem.  These flowers are a pale or mid blue, (less intense than the blue of the native bluebell) and sometimes white or pink. The flowers are more ‘open’ with a cone shaped bell and their anthers and pollen is a blue colour.  The table below summarises the main differences between the two flower : 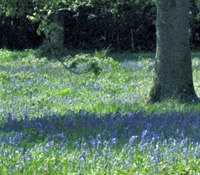 The onset of Spring brings a variety of blue flowered plants such a bluebells, hyacinths and squills in our gardens, parks and woodlands. They appear in early Spring before the leaf / tree canopy closes over, so that they can take full advantage of the light.

The bluebell is ‘easily’ recognisable.  The bluebell that is native to the UK has the latin or Linnaean name of Hyacinthoides non-scripta. Its deep blue and scented flowers hang from an elegantly arching stem. It is found in abundance in many deciduous woodlands and hedgerows across the UK, though it is unusual or rare in parts of East Anglia and Scotland.  The spanish bluebell can hybridise with the native bluebell, giving rise to types that have a mixture of the above characteristics.  A summary of the differences between the two species is given in the table above.

The Natural History Museum is trying to map the distribution of native and non-native bluebells and it is asking people to complete an online questionnaire about the bluebells in their gardens, local parks, hedgerows.

If you can help, surf to:  http://www.nhm.ac.uk/nature-online/british-natural-history/survey-bluebells/bluebell-aboutthesurvey/index.html

The bulbs and stems of the bluebell were once used to make a form of glue for book binding, and for fixing arrow flights.