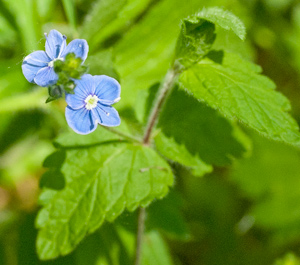 The leaves generally occur in opposite pairs, there are 'teeth' along the leaf margin but the leaf is not deeply divided nor lobed.  The stems (and leaves) are often hairy.

In the case of the germander or bird's eye speedwell (Veronica chamaedrys) the leaves are oval in shape and noticeably toothed.  Short leaf stalks may be present - depending on the position of the leaves on the plant.

There's a similar species that grows in woods, V. montana, the Wood Speedwell, but that has much longer leaf and flower stalks. 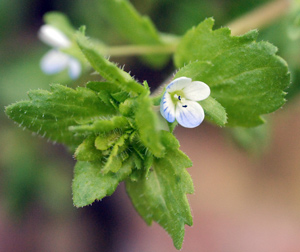 In the case of the green field speedwell (V agrestis) the leaves are broader, less elongate / oval. 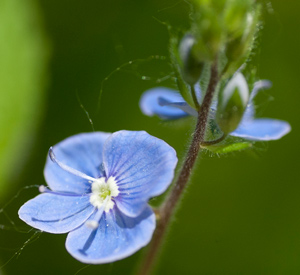 The flowers of bird's eye speedwell are quite small (8-11 mm wide) and have four petals of a deep sky-blue color, with a white centre. The flowers have outwardly radiating, darker blue stripes. One of the four petals is smaller and lighter.

There's a similar species that grows in woods, V. montana, Wood Speedwell - this has much longer leaf and flower stalks. 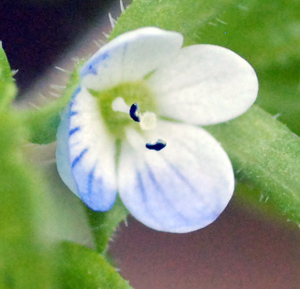 The flower of the green field speedwell is a paler blue and the lower lip of the flower is white.

Speedwells typically have blue flowers, though there is some varation in colour from various shades of blue through to lilac.

There are nearly 2 dozen species of Speedwell in the British Isles but nearly half of them are rare or uncommon which makes identifying the remainder a bit easier.

Generally, the speedwells are small to medium sized plants, some are annuals, some perennials.  Their blue flowers are amongst the first flowers to be seen in Spring.  Some species of Speedwell invade lawns and gardens.