There is some evidence that power lines could be affecting honey bees as the lines emit an electro-magnetic field; these fields alter the bees ability to learn.  Lab experiments in which bees were exposed to electromagnetic fields similar to those under power lines showed that the bees were

The asian hornet is an invasive (non-native) species.  They arrived in Europe (France) in 2004.  DEFRA is trying to prevent them becoming established in the UK through the eradication of individuals and nests.  They are honeybee predators, capturing workers and feed them to their young.

Back in the ‘home territory’ of the asian hornet, bees have a defence against attack.   Hundreds of worker bees quickly swarm into a balls around the hornet.   The bees then vibrate their wing muscles so quickly that they generate heat and the temperature inside the ball rises and roast the hornet alive with their body heat.  These “hot defensive bee balls” were  seen in Japanese honeybees (in 1995). The ball must form quickly before the hornet can send out pheromones to attract others of its kind.

Sadly, this act of altruism by the workers comes at a cost.  Normally, workers live for several weeks but the bees that contribute to the ball die within 10 days. Unfortunately, our European honeybees do not possess such defensive strategies. Consequently, bee keepers are experimenting with various methods to deter the hornets, for example,  meshes, sticky patches and flashing lights on the hives. 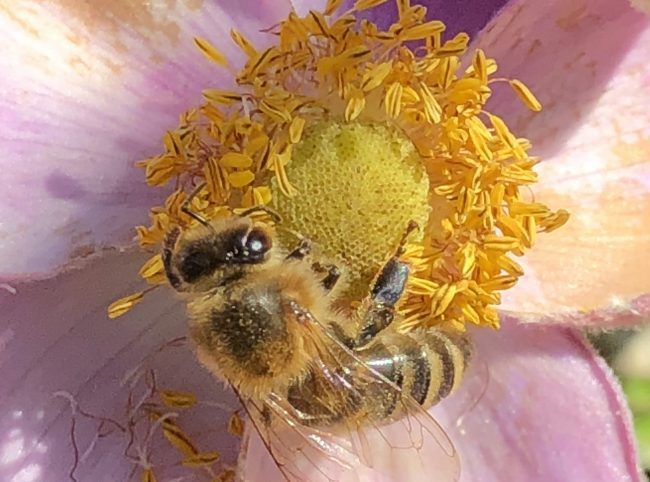 Soils store vast amounts of carbon (in the form of humus / organic remains), more than the carbon locked up in trees.  Scientists from universities at Exeter and Stockholm have looked at data on some 9000 soil samples from around the world, and found that carbon storage declines with increasing temperature.  Coarse soils lose carbon faster than clay rich ones.