In recent times, new or different threats have emerged to upset the balance of woodland and forest ecosystems.   In the 1960’s and early 70’s concern focussed on the effects of air pollution, particularly the effects of acid rain.  This type of pollution was characterised by the deposition / assimilation of sulphur dioxide and its derivatives (sulphuric & sulphurous acid), plus various nitrogen oxides.  This air pollution was largely due to industry and traffic.

Some of the most striking effects of ‘acid rain’ pollution were seen in the coniferous forests of Germany - where it was termed : Waldsterben [Wald=forest plus sterben=to die].  The various sulphur and nitrogen compounds in the air not only caused dieback of the trees, but also damaged the lichen flora of the bark, trunk and branches.  The loss of lichens from industrial regions had been noted back in the 19th century but was examined in detail by Gilbert (Lichen deserts) in the 1960's & 70’s around Newcastle in the U.K.

German forests are again suffering from dieback [or Waldsterben 2] but this time the damage has been associated with climate change (drought, intense heat,  fires and storms) plus bark beetle infestations.  A walk through some areas will reveal dead spruces and beech trees. 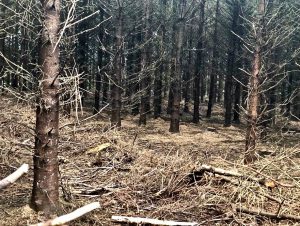 The German Ministry of Food and Agriculture has said that the forests need ‘quick help’ and has proposed a large scale clear up and re-afforestation program.

This is a strategy which has been employed before but it has its critics.  The removal of dead wood has significant affect on the insect and fungal populations that are dependent on deadwood.  Decomposing wood allows saproxylic beetles to flourish, plus woodlice and springtails - and many different species of fungi. A more open  woodland would also allow birds of prey (owls etc.) to hunt for small mammals.   The creation of extensive stands of dense forest with similarly aged trees is an ‘invitation’ to disease, pests and greater susceptibility to weather events.

There is a further argument for leaving gaps in the canopy of the woodlands and forests to enable the regrowth of native tree species - as these would help increase the resistance to extreme weather events (resilience).