There have been various articles that comment on the decline in numbers / variety of bees and butterflies, now a recent study reported in the Journal of Applied Ecology comments on a worrying decline in the numbers of ground beetles or carabids.   Scientists at Rothamsted Research, working with the NERC Centre for Ecology & Hydrology have found that some 70+ % of ground beetle species have shown a fall in numbers.  The scientists monitored beetle populations at many locations throughout the U.K. over a time scale of some fifteen years. They found the decline in the abundance of ground beetles was comparable to those reported for butterflies and moths. 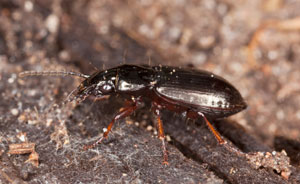 Carabids or ground beetles are 'generalist predators'; that is they eat a variety of small invertebrates - such as aphids and slugs (an inportant role in most ecosystems and on farmlands).  They act as a 'form of pest control' and carabids also eat the seeds of many weed species.

In turn, ground beetles form an important part of the diet of various species of birds and small animals (insectivores - such as voles).   Ground beetles are to be found in almost any habitat or ecosystem - from ancient woodlands to volcanic mounds. However, the research indicates that mountain dwelling, northern moorland and western pasture beetles (in the UK) have shown the most significant falls in numbers, but those associated with woodlands and hedgerows seem quite stable.

[…] Articles on woodland activities, flora and fauna, conservation and other woodlandy topics.  […]

[…] Articles on woodland activities, flora and fauna, conservation and other woodlandy topics.  […]

I wonder what the percentage of the total land that is owned by landowners/farmers is managed in a wildlife friendly way? Anyone have any figures? Statistics?

Certain declines are perhaps viewed as less significant within woodlands, because carabids naturally thrive in these less intensively managed habitats. I vaguely recall, for example, a Stag Beetle will not become sexually mature until the age of eight years. In this case, disturbance would be an inevitable obstacle to its ultimate survival. If we transfer such issues to Farmland or Heathland etc. then, it is no small wonder why our carabids have suffered. Farmland birds are also in serious decline, partly because of over-application of pesticides, additional habitat pressures and ever-changing farming practices. Consequently, such practices also result in constant disturbance to the environment. Until individuals look from the bottom of the food chain upwards, we will not resolve these human and mechanical impacts inflicted upon nature.

On a positive note, much wildlife-friendly work is undertaken (although largely unnoticed by the general public) by many landowners/farmers based on underlying research, from the likes of whom you mention at the start of your article.