Spring might be a wonderful season for nature lovers in general, but for those with a specialist interest in fungi, it can be something of a dry period. This past April has been drier than usual and, dare we mention it, the past couple of months of lockdown have kept many of us housebound anyway, with far fewer opportunities to get out and amongst it looking for things of interest.

So is there really not that much to see or discover around this time of year? Well, one might think so, but my own eyes were opened recently when Helen Baker on the British Mycological Society Facebook group organised a wonderfully touching initiative to mark the sad and untimely recent passing of the group’s moderator and founder, Richard Shotbolt, whose encouragement and advice has acted as a spur to many a fledgling mycologist over the years. The Lockdown Foray was held on 18th April, a particularly inauspicious time for finding fungi one might think and, for those of us whose gardens aren’t of any significant acreage, a potential exercise in futility. Oh well, it’s not like any of us really had anything better to do… 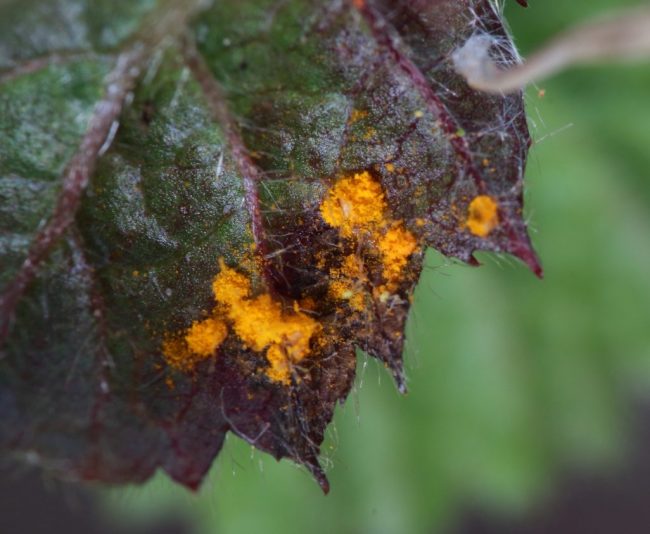 The results, recorded and posted onto the Facebook page, came as something of a surprise. It turns out there is rather a lot out there and remarkably close to home at this time of year, if one cares enough to look closely for it, although admittedly nothing much to speak of in the cap and stem agaric variety. What we saw instead was a prevalence of rusts, a rather overlooked part of the fungi kingdom that I touched upon last August with my post on the Blackberry Leaf Rust (Phragmidium violaceum)

Rusts are commonplace, but rarely noticed, little written about and generally considered outside of the scope of nature observers, although for those with vested interests in keeping spaces of plant cultivation pristine and uncontaminated, be they gardeners or crop-growers, their mention can invoke shudders of horror. And yet they are rather fascinating when you look more closely, and it certainly pays to know a bit more about them. 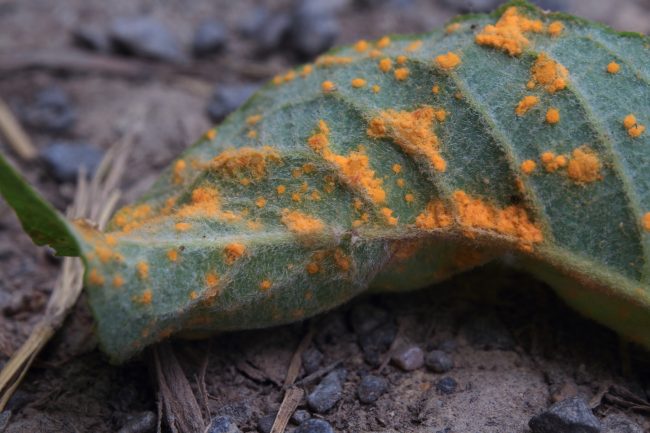 So first of all, what are rusts? In a nutshell they are “plant-parasitic fungi that usually induce rust-coloured spots on the above-ground parts of living plants”, to quote the opening lines of the introduction to Roesten van Nederland / Dutch Rust Fungi, by Aad Termorshuizen and Charlotte Swertz. Yes, that is right – the go-to source on rusts is not a British publication but Dutch, a key indication of the lack of attention some aspects of the natural world are given in this country.

Not that this is an insurmountable problem given the geographical proximity of The Netherlands, and indeed the book covers the total of 345 species that comprise all the rusts ever found in the United Kingdom and Austria too, as these are the countries for which data was available to the authors, although presumably there’s no really dramatic variations for other countries across Europe. A further bonus is that the text is in both Dutch and English, but the most important, and the main reason I am going to sing its praises and quote liberally from its pages in this piece is that its authors have made it available as a downloadable PDF from this site here . I trust you’ll believe me when I say, there really is no better time to get into rusts. 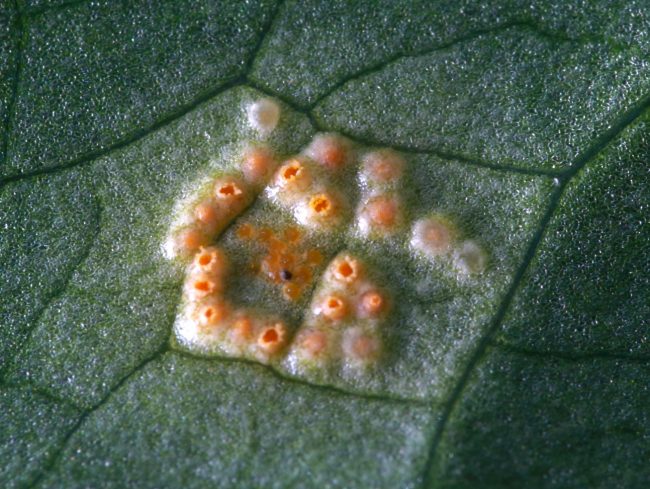 The crucial point that separates rusts from the other fungi discussed in these posts is that they are biotrophic. Rather than breaking down dead organic matter for food, they feed off living plants and to the detriment of their host. Often the damage is merely cosmetic and localised to the specific parts where the fungal infection has entered, through the stoma, for example, the tiny opening in leaves through which the plant takes in carbon dioxide and releases oxygen. The rust fungus forms its fruiting bodies, the discolorations, bumps and pustules through which it releases its spores, around this precise area, and the mycelium barely penetrates much further into the plant.

For certain species however, the infection is described as systemic, and the fungus grows throughout the whole plant. Termorshuizen and Swertz give the example of Puccinia punctiformis, which is widespread enough to warrant a common name, Creeping Thistle Rust. My own photographic example is of Puccinia lagenophorae, which infects groundsel, resulting in crater like eruptions covering all its leaves. Apparently this particular fungus is native to Australia and New Zealand, so its commonness in the British Isles shows just how easy it is for rusts and other plant pathogens to reach new parts of the world, one would assume primarily due to human activity. 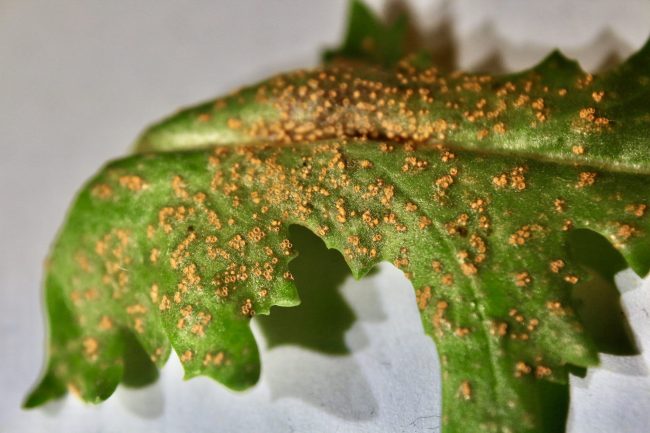 A systematic infection of Puccinia lagenophorae on groundsel, showing aecia.

Some of us might not mourn the thistle or common groundsel if it were to be wiped out by a mass rust infestation, although this isn’t likely to happen anyway. It is hardly in the interest of the rust to kill off its host. As Termorshuizen and Swertz point out “The fact that in nature such epidemics never occur on such a scale simply is because large areas of genotypically homogenous vegetations do not occur there. In mixed vegetations, the dispersal of urediniospores is much less efficient than in crops.”

They can however severely limit plant growth and fruiting ability, which is why those rusts that specifically attack commercial crops are really things you want to look out for. The best example is Puccinia graminis, commonly known as Black Rust, Wheat Stem Rust or simply Stem Rust – bad news for wheat farmers.  For gardeners and allotmenteers, Onion Rust (Puccinia allii) won’t render your crops of onions, leeks and garlic inedible, but it might reduce the size of your yield. Nor are those that effect the leaves of flowers like Rose Rust (Phragmidium tuberculatum) or Chrysanthemum White Rust (Puccinia horiana), going to have a dramatic effect on the health of the plant in question, although many gardeners will no doubt find them unsightly. 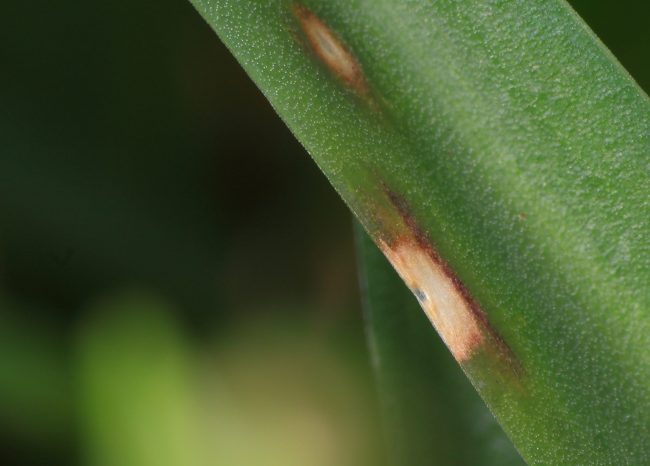 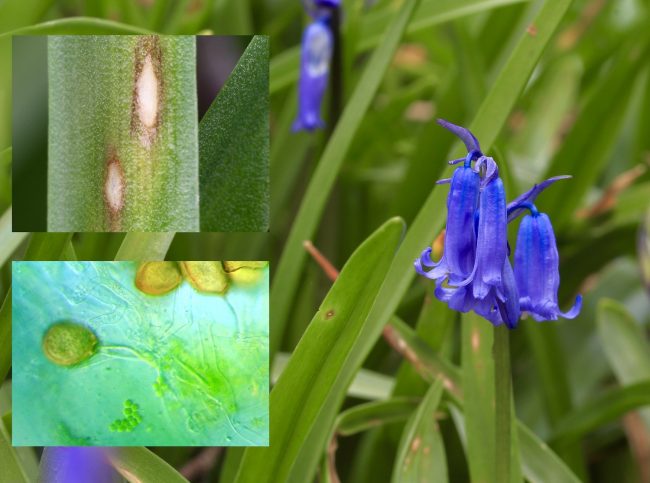 A lovely blog. Have only just found it (through a search for “fungi” + “bluebell”). It would be great to have the blog finished. I tried to set my Feedly account to automatically download posts from this blog but no luck. Does the blog have an RSS feed? The book you mention certainly is good! I’ve been using it for a few years now.