The term 'wildlife corridor' is used to refer to any linear feature in the landscape that can be used for migration or dispersal of wildlife.  Wildlife or biological corridors offer the possibility of linking habitats and reducing the isolation of populations.  Linear features vary considerably in size (in terms of width and length), they may not be continuous, for example, a hedgerow may have a gate in it or an opening to a field.   The extent to which a linear feature is broken by gaps has implications in terms of its function as a corridor.  Patches of natural features or a particular habitat type can also enable wildlife to disperse / migrate - the term 'stepping stones' has occasionally been applied to them.   In a countryside that is becoming increasingly fragmented, the role of wildlife corridors has assumed greater importance.

All of the following may function as a corridor to a greater or lesser extent : 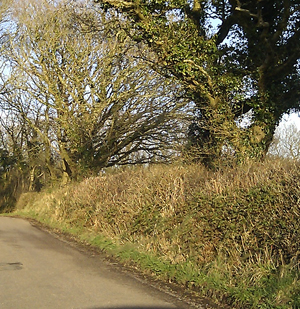 Ralway lines and tracks can allow for the dispersal of plants - for example, the Oxford Ragwort * (see below)

Some linear features have additional benefits - trees and hedgerows can ameliorate the effects of pollutants in towns and cities, some offer amenity value / recreational value. Whilst these 'corridors' offer opportunities for plants and animals to disperse, allow for mixing of gene pools, it should also been borne in mind that pests and pathogens can also spread along such 'pathways'.

Hedgerows have featured in a number of woodlands blogs - they are generally narrow bands of woody vegetation and associated organisms that separate fields / stock / pasture.  Hedgerows often interconnect with one another, forming a network or 'bocage'.  Some 500 / 600 plant species have been recorded in English hedgerows (which says something about their importance to our wildlife) and would seem to be obvious candidates to act as corridors .

Trapping studies have shown that mice and voles move freely along hedgerows, as do carabid beetles (moving out of woodlands along hedgerows); the seasonal migration of adders (from hibernation areas) is assisted by hedgerows, banks and ditches.  Badgers, when dispersing, are also known to use hedgerows.

Railway cuttings and embankments often support a diverse flora (hence leaves on the line!) which afford a number of niches and habitats and it is thought that foxes and deer move along these from rural areas into major cities e.g. roe deer entering Bristol by means of railway lines and river banks. 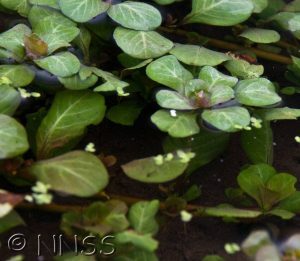 Rivers themselves are used by animals such as otters, and have been 'used' by a number of invasive aquatic species.  One such species is the water primrose.  It is a highly invasive freshwater weed from South America. It has already become a serious problem in France where it blocks water ways and overgrows ponds and lakes. It has recently been found in Britain.  Key features of the water primrose include

If you see a water primrose, you should report it, http://www.brc.ac.uk/risc/water_primrose.php  or email alert_nonnative@ceh.ac.uk

The Image of water primrose (Ludwigia grandiflora) above is courtesy of the gallery at http://www.nonnativespecies.org/

"Oxford ragwort gets its name from the Oxford Botanic Gardens where plants were first grown in the 1700s. They had been collected from Mount Etna on the Island of Sicily where they were found growing on the lava fields. By 1794 the plant was to be found on the city walls having escaped from its original source. With the advent of the railways, Oxford Ragwort finding the clinker beds of the tracks similar to its original volcanic habitat spread around the country. Oxford Ragwort can now be found all over the UK and is often to be found growing in the gaps in paving stones."

Hi Ray, Why do they need to be cared for? Surely a wild hedge is better for wildlife?

All this corridor discussion only applies to those hedgerows that are planted and cared for: A Rare Sight these days…there aren’t many who can do that skill ( but I can- and I see the everyday negligence)