Cooking Under the Sun: The Solar Oven

The long hot summer months have provided plenty of scope for al fresco cooking and eating this year. For most, this means channelling our inner caveman, poking at unevenly cooked slabs of meat over a bed of smoking charcoal. The record-breaking levels of sunshine we have enjoyed recently, however, suggest other opportunities for off-the-grid culinary experimentation. The expanding range of solar ovens on the market may never replace the traditional barbecue experience, but cooking using just the free power provided by the sun’s rays can be a lot less faff than hours of fiddling with newspaper, firelighters and dusty briquettes.

Aside from providing the smug satisfaction of keeping carbon emissions down to a minimum, these campsite counterparts to Le Creuset offer up far more possibilities for the more adventurous outdoors cook than the usual backstop options of the charred sausage or the billy can of beans, opening up a brave new world of stews, curries, baked vegetables, even risottos…

Before this all begins to sound a bit too much like froth-mouthed evangelising, I want to turn to my recent experiences investigating the potential of a way of cooking that most will probably never have considered a possibility in the generally lukewarm climate of the United Kingdom.

There are quite a few solar ovens on the market. This Best Reviews Guide article provides a survey of what is out there . I ended up with the Fondchy Portable Solar Cooker which, ranked second on the list, seems to provide a fairly typical example of this surprisingly simple technology. 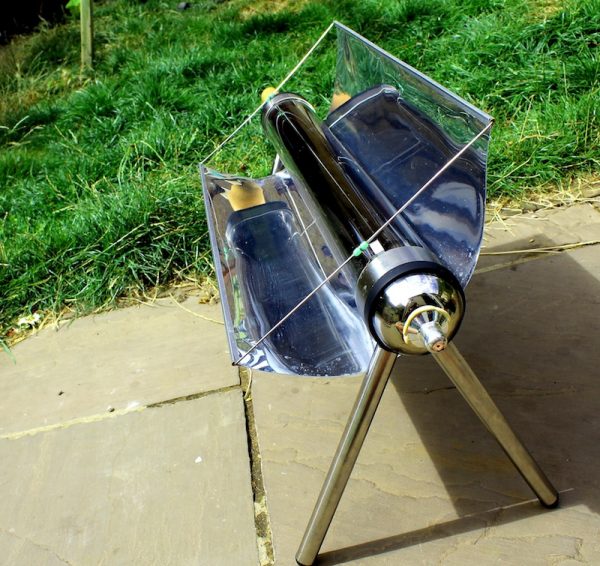 It is rather difficult to work out how much it costs: Amazon lists it, at the time of writing, at £139.00 reduced from £269.00 (Amazon Germany lists it as 139 Euros). Like many of the ovens on the market, it is both made in and shipped from China, so perhaps the cost will come down if the demand increases, because it certainly doesn't seem like it should cost that much to produce. 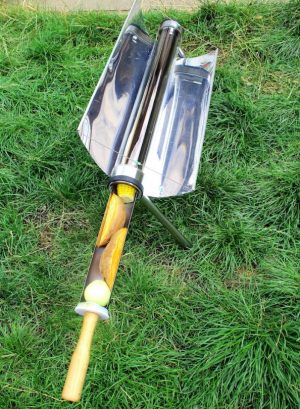 The oven itself consists of a vacuum tube, 62 centimetres in length and 5.5. centimetres in diameter, and made of 70mm thick glass. It is quickly assembled by screwing in four short supporting legs that raise it about a foot off the ground. The food is placed in the steel cooking try, which looks like a narrow gutter with a handle attached, and when inserted into the oven tube, seals it so that the heat is trapped within.

The attached parabolic reflector concentrates the sun’s rays onto the tube. You need to place it so it is facing the sun, when the shadows of the fore and rear legs are aligned: you will find yourself having to reorient it slightly during lengthier cooking periods. In optimal conditions, the oven heats up rapidly within about 5 minutes, at which point you place your food in the tray and then just leave everything to do its thing. There’s little mess or fuss involved.

In full sunlight, the manual lists a working temperature range of 150-330C (although there is no obvious way of checking how hot it is when it is in operation) and rough cooking times of about 10-15 minutes for a sausage, 25-35 minutes for potatoes and 20-30 mins for a steak.

So let’s get the negatives out the way. While incredibly simple to use, the accompanying instructions leaflet leaves a bit to be desired, brief and written in the kind of vague and ambiguous English familiar from Ikea assembly instructions. For example, it says you need to “adjust the reflector to make sure reflected light is focused on the vacuum tube”, but doesn’t say how you would be able to tell if it were focused correctly. It is not overtly clear to the eye when this might be the case, so it will take a bit of trial and error to work out how to get the oven heating up most efficiently. 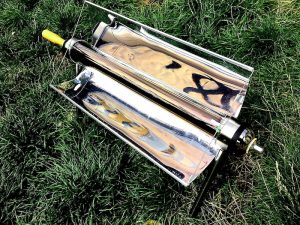 Also the parabolic reflector itself seems a bit flimsy, and doesn't look like it will endure particularly rough handling or last more than a few years of extended use. I assume it is replaceable, but where you might find the replacement it another matter.

Nevertheless, the oven is easily set up, and on my first trial, within a half an hour of placing an onion, a sweet potato, and a couple of tomatoes in the tray, I had a plate of exquisitely cooked vegetables.

A few things immediately become apparent. Firstly, because of the sealed nature of the tube, the vegetables effectively stew in their own juices within the oven, which means they retain a wonderful flavour (potatoes work magically!), and also run little risk of burning if you forget about them and leave them too long. It is a similar case with meat, so you will run little risk of completely carbonising a sausage, but it will naturally brown from the juices that accumulate and heat up in the tray. You might consider the oven to operate somewhere between a microwave, a pressure cooker and a slow cooker rather than a grill. 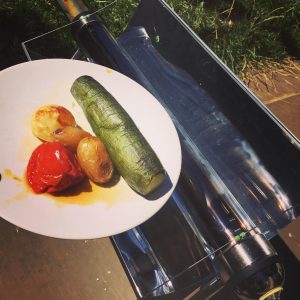 That said, the tube itself is rather narrow, at about 5cm in width.  While the instructions state you can cook chicken wings in about half an hour, the tray itself is not really wide enough to accommodate them. Indeed, you won’t be getting anything substantially thicker than a mackerel or sweetcorn cob in there, and certainly won’t be able to cram a chicken or a pizza inside there.

If you can adjust your worldview to the idea that burgers don’t have to be round and flat, for example, such limitations actually encourage creativity. The tray is wide enough to fit in a long strip of pork belly or tenderloin, for example, which you could wrap in bacon or leave to marinade for an hour, as I tried, in a sweet and sour sauce whipped up out of soy sauce, vinegar, honey and Chinese five spice mix.

You can also play to the advantages of the sealed tube to create sublime stews and curries. I was particularly proud of a lamb vindaloo I whipped up recently. 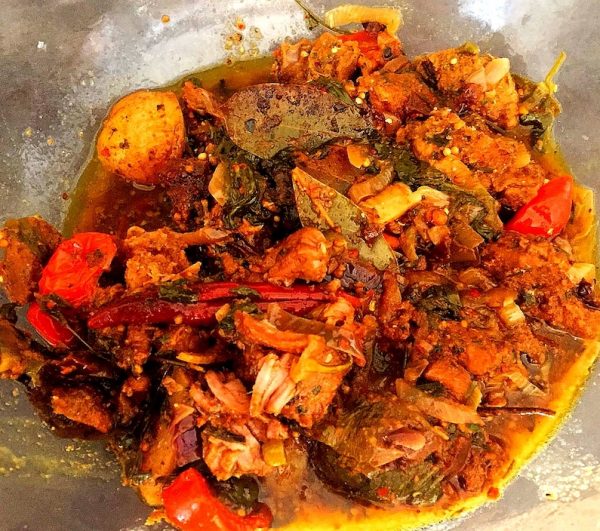 The lamb itself was left to marinade in a bowl of salt, vinegar, garlic, ginger, chillies and other spices (ground cumin, coriander, turmeric, cinnamon, nutmeg etc – online recipes are not hard to find) for about an hour. During this time, I put chopped onions with a little oil in the oven tray and left it to cook. It had begun to brown after about half an hour. Then I mixed this in with the marinated curried lamb and placed it all in the tray with tomatoes and chopped potatoes. As the mix cooked, the tomatoes baked and released their flavours into the mix of juices produced by the lamb in an almost divine manifestation of culinary alchemy, with no need to add any additional liquid. 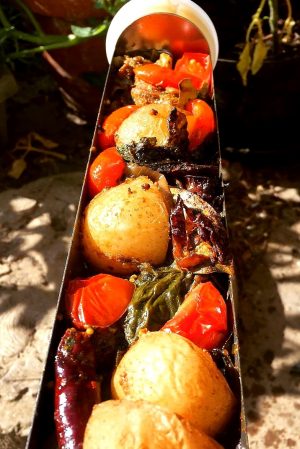 The size of the cooking tray, though, is definitely a limitation. The leaflet claims a capacity of 1 litre, so there’s only so much you can cook at any one time, but the dimensions and half-cylindrical nature of the cooking tray means also means that any juices that accumulate during the cooking process easily spill out while you are checking how everything is cooking. In an ideal world, some sort of spirit level on the tube would be really helpful so make sure the liquid doesn't all pool in one end, not to mention some kind of thermometer to give an indication of what sort of temperature it is at.

But these are ultimately minor quibbles, because the fact is that this particular make proves that the solar oven works, and it shouldn't be beyond the wit of man to improve upon the design in the future. One should also note that there are Dutch Oven alternatives to this tube shape, although I can’t vouch for any of these at present.

Hikers, cyclers, those who work outdoors, or those just heading for a quick picnic in the park should also note that, at 1.5kg and supplied with a convenient carry bag, the Fondchy Portable Solar Oven is very light and portable, and in perfect conditions, can be up and cooking within a matter of minutes.

But there’s the rub, because I will be the first to admit that this summer was been rather unusual in that we have had “perfect conditions” for several months now. Obviously cooking times are longer the cloudier it is, and one can assume that for much of the year it barely functions at all. Similarly you are not going to get any action out of this once the sun goes down, so as replacement for the campfire experience, it has obvious limitations. 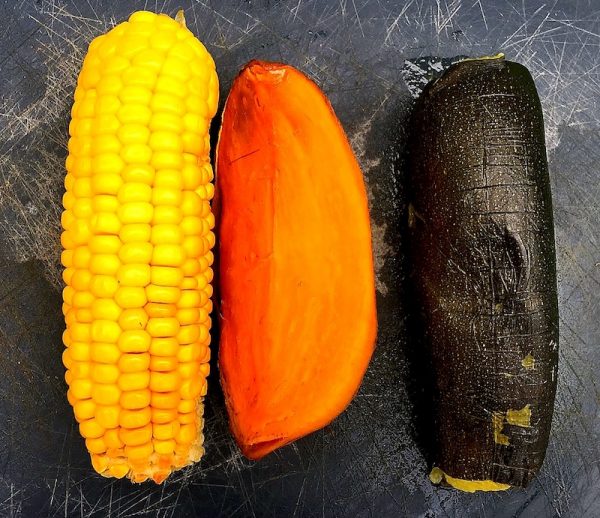 However, on a hot summer’s day, it has one clear benefit over a barbecue in that you don’t have to continuously keep poking and prodding and turning your food to check whether its cooked, leaving both hands free of forks and tongs for more useful activities, such as holding a beer.