Have we moved into ‘the human epoch’ ?

As a species, we humans have only been present on the Earth for a ‘blink of the eye’ in geological terms.   The Earth is approximately some 4.6 billion years old. Geologists have divided up these years into a number of geological periods or epochs - from the Pre-cambrian (from the formation of the earth until about 540 million years ago) to the most recent - the Holocene, which started at the end of the last Ice Age - about 12,000 years ago.

Modern Humans emerged out of Africa probably some 200,000 years ago, and since that time they have increased massively in number.   At the end of the C18th , there were probably about one billion people; now there are over seven billion.

We have changed the Earth in many ways.   For example, we have

All of these things are causing many to debate whether or not to speak of a new geological era - one characterised by human intervention - namely, the ANTHROPOCENE.   What geological evidence will we leave behind?    From the deep ocean trenches to the upper atmosphere, from pole to pole, our imprint is inescapable. 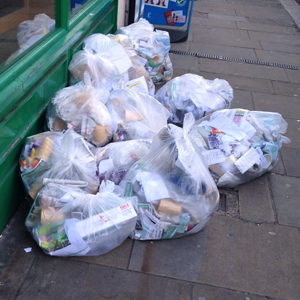 This is particularly true for Plastics; they are now everywhere.  Plastics are inexpensive and durable.  Our day-to-day life would not be the same without them - they are used to wrap our food, for containers, for window frames and doors, essential parts of cars, computer cases, phones, iPods, plastic bags for our shopping etc.

Plastics constitute approximately 10% of our discarded waste, but they persist - they are slow to degrade.  Sadly, some 40% of plastics end up in landfill, but much is dumped into various ecosystems - plastics are jettisoned everywhere in our environment.

Recently, I wandered through a local woodland - it was littered with plastic waste - bottles of every size and shape, plastic bags from various supermarkets, food wrappers, plastic tops of aerosol cans, polystyrene food containers, even an abandoned small boat (see image below)!   Plastic items may choke and trap animals, plastic fishing-line can entwine around animals, cutting into their flesh. 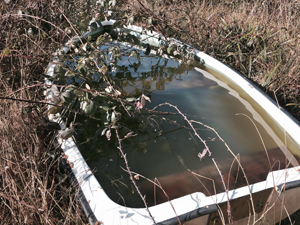 Plastics are also dumped or find their way in our seas and oceans . Record breaking sailor, Dame Ellen MacArthur has seen more of the world’s oceans than most people and she has warned of the consequences of this accumulation of massive quantities of plastic waste in the oceans.  It has been estimated that there are some 5.25 trillion pieces of plastic debris in the oceans.  Post-mortems of sperm whales stranded (near the coastal town of Tönning) on the North Sea coast this winter have revealed that their stomachs contained quantities of plastic, including a 70cm long engine cover, the remains of a 13 M long x 1.2 M wide safety net used in the shrimp fishing industry, and part of a plastic bucket.

Plastic bags can slowly break down in the sea, and in the process they release toxic chemicals that may be ingested by fish and other animals. 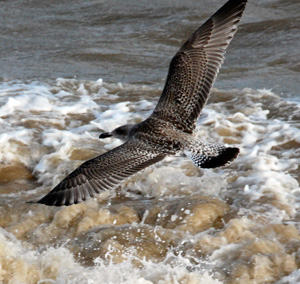 Plastic items can be a threat to a variety of species, such as sea birds, turtles and seals, which swallow them - resulting in intestinal blockage and starvation.

There are also the tiny plastic fragments released by the gradual breakdown of plastic items; these slowly drift to the sea bed, creating a carpet - the environmental effects of these tiny particles is unknown.  However, concern about ‘micro-plastics’ has increased in recent times.  Some arise from the degradation of larger plastic items, but many come from from manufactured products such as cosmetics (microbeads / micro-exfoliates in face washes, hand soaps), so they pass from homes to sewage works, to rivers, to seas and oceans.   Micro-plastics have been found in bottom feeders like lugworms, but also crabs and other sea creatures. 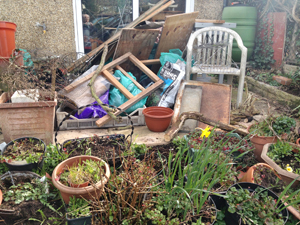 One of the most-used plastics is polyethylene terephthalate, also known as PET.  It  is used in fibres for clothing, in the manufacture of containers for liquids and foods, thermoforming for manufacturing, and in combination with glass fibre for engineering resins.  It may be that nature has begun to fight back against the mountains of plastic dumped into its soils, rivers and oceans - a team of Japanese scientists have found a bacterium that can break the bonds of PET - degrading it.   Genetic analysis has revealed that the bacterium, Ideonella sakaiensis 201-F6, may have evolved the enzymes capable of breaking down PET, perhaps in response to the accumulation of the plastic in the environment over the past 70 years.

Too many people; too much waste; too much plastic and too much apathy. We are killing our environment…

You’re saying what I and many others (though, sadly, not enough) have been thinking. There are too many of us and we’re behaving too badly – it has to stop one way or other

Back to Malthus then!

HI, it’s not the plastic or whatever we produce, is the number of people we are, we need to say : STOP MAKING CHILDREN!