When I say I get a buzz out of detecting I mean it literally: a good detector device makes a different buzzing sound for different metals.  A low note or deep buzz means it's probably iron and not worth digging up, saving the detectorist wasting time digging out old nails or fence wire.  In contrast, a higher/lighter tone means you are more likely to be finding bronze or even maybe the detectorist's dream - gold or silver coins.

Today I did my first day of metal detecting with an expert detectorist, Joe Green, part of the "dynamic trio" as he and his team call themselves.  Joe took me around a woodland where he has permission to detect and we spent three hours scanning the ground and digging out finds.  In that short time we found: 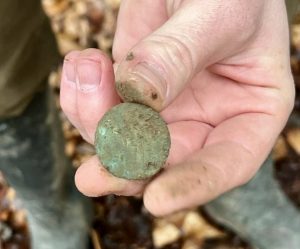 Less usefully we found one ring-pull, some foil, and about half a dozen discarded shot cartridges from pheasant shooting in recent years.  All the items we found were within six inches (15cm) of the surface and in good flinty/chalky soil they will usually be even nearer to the surface.  Clay soils are more difficult and objects often escape detection by sinking down over the years.

According to Joe, my guide and mentor, it's a logical but probabilistic game where you look for features and ancient tracks and if you detect something interesting you should concentrate on that area as finds are often concentrated into "hot spots".  High ground is often promising and sites of ancient settlements can be rewarding.  Joe has been really successful and has found some gold and silver coins some of which are currently at the British Museum which may be bought from him. 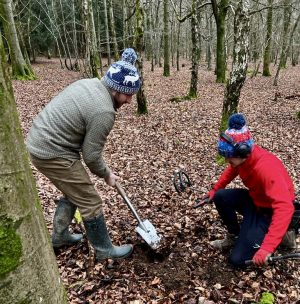 As any detectorist will tell you, there is always a moment of optimistic anticipation between the moment when the metal detector bleeps and when you have excavated and brushed off your find.  After the tell-tale bleep it's not always quick to track down small finds and many detectorists use a small handheld device for the last bit of close-range finding, called a "metal detector pinpointer".

Joe showed me how to use the detector so that the head of the device, the coil, was parallel to the ground and I swept the head in wide, overlapping arcs so that no stone is left unturned - if it's got a coin under it.  Some of these devices have larger coils which enable more area to be covered and give the coil a better reach.  For our detection we used a Deus 1 detector, costing about £750 but Joe is about to invest £1,400 to get the Deus 2. 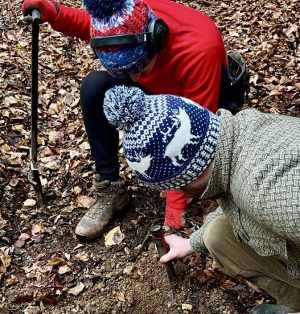 "The UK is remarkably liberal for detectorists and although you need the landowner's permission you don't have to be qualified to detect', says Joe. In France,  a detectorist needs a special license from Authorities to search an area of land, as well as permission from the landowner. In Poland, detecting is banned.   Joe adds that "you can't detect on Sites of Scientific interest, Ministry of Defence land or Historic Monuments.   Also, if you find "treasure", such as gold or silver over 300 years old - you have, in England and Wales, to give first refusal to the authorities in case they want to buy it from you for a museum.   Usually if they do buy you find, the proceeds are shared equally between the landowner and the detectorist".

For my metal detecting outing I had done some armchair homework by watching Mackenzie Crook's BBC Four series called "Detectorists".  It's a magical introduction to metal detecting, the club rivalries, nighthawks (illegal night-time detectorists), and the use of detectors to find lost objects.  It also has some scenes where Toby Jones portrays a character who finds gold "treasure" which gets displayed at the British Museum. 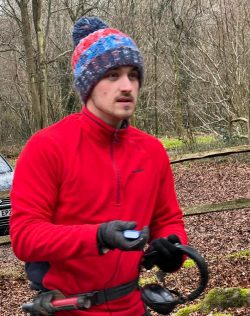 Joe has a real ear - and eye - for the metal detecting hobby and he's been doing it for 13 years.  On our outing he found a shiny city livery button which he has dated to 1825 and was bought from a London Taylor's shop.  Livery buttons were part of the uniform that was worn by servants to a particular estate / household.  May be it was lost whilst searching the area for firewood.

My half day of detecting left me astonished to find just how much metal there is in an ancient woodland.   It made me realise just how much unrecorded history exists in every part of Britain and how much of life used to happen outdoors.  In our three hour session, we must have detected about 20 interesting objects over just a very small part of the woodland - in the whole wood there must be hundreds, perhaps thousands, of hidden objects.  History may be unrecorded here but it has left traces and detectorists have an important role in exposing the past life of woodlands. 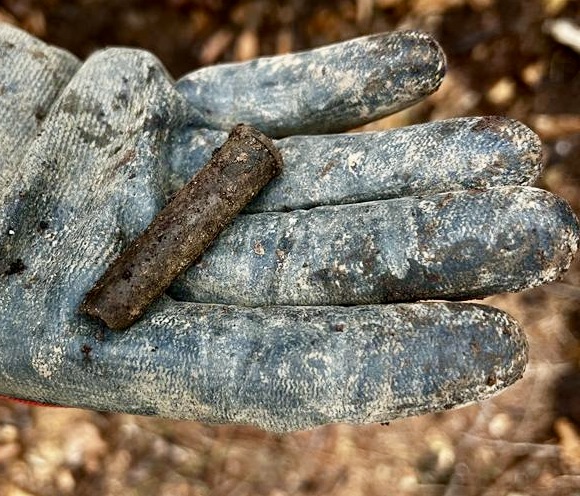